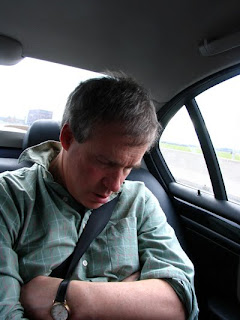 The Salon can be exhausting...
Just back in London from the Salon after five days of full throttle tastings and visits – hugely enjoyable but tiring as the shot of one of my travelling companions indicates. Personally a very successful Salon this year with some very good tastings with producers I already know as well as with some new discoveries.
As usual there were many people that I wanted to see and taste with that time prevented me from seeing. If there are any producers that I know well, who are reading this blog and wondering why I didn't get to see them, it was solely down to a question of the ever ticking clock.
I have much to write up from the trip to the Salon as well as still some reports to do of Loire wines tasted in London before heading off to the Loire, where one again we stayed in the highly recommended Hotel du Mail. The hotel changed hands last September with Christian and Catherine Duval taking over Hervé, who appeared to have rather lost interest. The hotel is a new venture for the Duvals, who have run café/bars for over 20 years – lately in Angers but previously near Le Mans. Our rooms for next year's Salon des Vins de Loire are already booked. 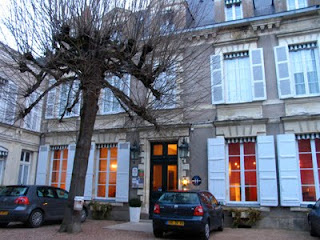 The Hotel du Mail in the centre of Angers
Posted by Jim's Loire at 23:31