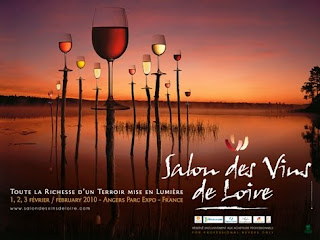 At the end of last year there was much discussion over the future of the annual Salon des Vins de Loire, which was established back in 1987. In these straightened times some, although not all, of the négociants want to cut the budget for the Salon so that it becomes bi-annual rather than every year. We need the Salon every year is the reaction from many producers, who find the fair an indispensable meeting place for the various cavistes, wholesalers and restaurateurs from the home market as well as their importers. It is clear if the Salon became bi-annual, then some producers would be asking why are we paying to fund Interloire?
To an extent I can understand the position of some of the largest négociants. Take Castel, for example, now the largest of the Loire négoce and based in Bordeaux. What benefit does it get from paying for a large stand at the fair? The clients it needs to see are small in number, although undeniably important and influential. Probably only six or seven from the UK: the supermarkets and the remaining national wine merchants, although shrunken in number since the demise of Threshers. 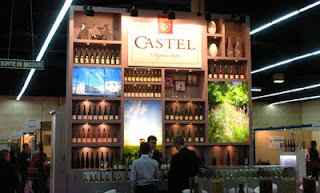 Castel's stand@the Salon 2010
So will there be a Salon next year? I certainly hope so as I've been every year since 1990 and have already reserved my room at the Hotel du Mail in the centre of Angers. The 2010 catalogue rather ambiguously asks people not to forget the 25th edition of the Salon 'Debut Février 2010' and promising a 'nouvelle formule: un salon encore plus adapté aux besoin de la profession'. But, gentlemen, unless I'm seriously mistaken, we are now right at the end of February 2010.

I spoke to Bénoît Roumet, director of the Bureau du Centre Loire, yesterday and he was adamant that there would be a Salon in 2011, although the date hasn't yet been fixed and there will be a meeting to discuss what changes if any will be made. There is no date yet for this meeting.

It will be interesting to see what changes they make. If it is to survive the Loire Salon needs to be held every year. Were it to become bi-annual I'm sure it would soon disappear. The Salon remains a generally well run and friendly event. Although it would look more professional if all the exhibitors arrived on time. Even on the Monday – first morning of the fair – many of the stands are habitually empty with exhibitors drifting in leisurely as the clock moves towards 9.30. 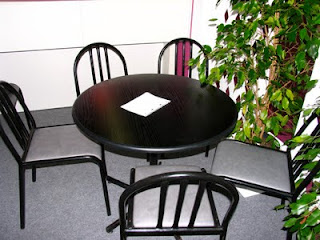 An empty stand@the Salon
I know there is a Gallic charm to everything starting half an hour late but that can be lost on foreign visitors who may have travelled over from America and who have a busy programme and find that they have to kick their heels.

Salon des Vins de Loire Wine Bloggers' Trophy
I'd definitely make changes here. Having been a trophy winner in 2009 I was invited to be one of the judges. We had some 20 shortlisted blogs to judge across the four categories and given around two weeks for the task. Not easy to do when some blogs have hundreds of postings to look at. Unfortunately the organisers were obviously determined to shortlist seven blogs in each category, irrespective of quality but there were a few very poor blogs on the shortlist.


Not just one language
Much more important than tidying up the bizarre rules is the need to make the wine bloggers trophy more international. This year only blogs partly or wholly in French were considered. Although there are some very good French wine blogs, French is not the language of the blogosphere. If the organisers want real credibility for this bloggers trophy it needs to be opened up to at least one other language – probably English. The vote on the internet for the best shortlisted blog attracted a total of just 1604 votes. Had the competition been more international my guess is there would have been more votes cast. It may well be that Aurelia Fillon's promising* Bu sur le web would again have topped a more international poll and would have given her win greater force and resonance.


* Aurelia has a real screen presence in the same way that Gary V does. Having started only in December 2009 she has already built up a considerable presence. To really built her following I think she soon needs to build in greater variety into her videos, which are becoming formulaic – look how Gary V varies his show. I'm sure Aurelia has the personality and drive to succeed.