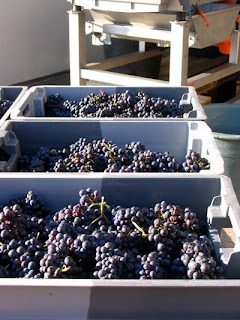 Sept 2009 true Pinot Noir awaiting sorting@Sancerre late September 2009
E&J Gallo has issued the following statement on the fake Pinot Noir.
Susan Hensley, Vice President of  Public Relations for E. & J. Gallo Winery:
"We are deeply disappointed to learn today that our supplier Sieur d'Arques has been found guilty of selling falsely labeled French Pinot Noir as recently as March of 2008. Based on the available information of the Pinot Noir that the French courts have investigated, Gallo imported less than 20% of the total and is no longer selling any of this wine to customers.  We believe that the only French Pinot Noir that was potentially misrepresented to us would have been the 2006 vintage and prior.  We want to assure our consumers that this is not a health and safety issue and that we will continue to work with the appropriate U.S. authorities to determine any next steps required for potentially mislabeled Pinot Noir in the marketplace."
The statement rather raises as many questions as it answers. 20% of the total of the fake Pinot Noir is still 3.6 million bottles. If Gallo only bought 20% of the fake Pinot Noir, who bought the remaining 80%. As far as I can see there is no mention in all the reports of the court proceeding of any other company who might have bought the false Pinot Noir.

'We believe that the only French Pinot Noir that was potentially misrepresented to us would have been the 2006 vintage and prior. 'I love the 'only' and the 'prior' – just brilliant!

The scam started in January 2006 – for bulk wine this would have presumably been for the 2005 vintage. It continued through to March 2008 when it was discovered by the French Suppression des Fraudes. Thus it would have included wine from the 2006 and, possibly 2007 but much less likely as the Fraud Squad were onto the case probably before the 2007 was shipped. It does raise the question of from where in Languedoc was the 2007 Pinot Noir sourced if demand remained at the level of the previous vintages. Was there enough genuine Pinot Noir available in Languedoc to satisfy Gallos requirements?

Also posting on Constellation as the other buyer.

***
The Save the wine column on Facebook has now reached 980 just 20 short of 1000. If you haven't already joined here is the link to show your support.

I tried to imagine, what the specialists of Gallo (and others) could have taken for Pinot... thought about Cinsault, but you indicate other assemblages.

I think it's unfortunately also the effect of technological winemaking, that you are no longer able to tell the difference... and that the label has become more important than the content - more Schein than Sein...

I have to agree with you, Iris, although to read the Gallo description of their Pinot Noir what they probably wanted was something that tasted like a Merlot but had Pinot Noir on the label ie a soft, seductive Pinot with low acid.

Weston – there are certainly a number of questions that Gallo and Constellation should answer. Whether they will or not is another matter. I suspect they may decide that silence is the best policy.

yeah they should keep quiet best for them. I personally won't be trying to avoid Gallo/Constellation myself

We were discussing this in our wine club and none of us believed Gallo could be innocent in this matter - it looks as though thee was a nice split the 'PN' was sold to G for less than the cost of PN but more than the usual amount for such wines. So G had deniability - though why this attempted to deny how much they bought I cannot think.

2 possibilities - they were defrauded, so they are trying to play it down to seek to maintain confidence in their product,

they weren't defrauded - so they are trying to play it down to seek to maintain confidence in their product,

They really don't know what they bought and what they did with itso they are trying to play it down to seek to maintain confidence in their product.

Or numbers of other possibilities - either way it won't affect my purchasing policy - it must be years since I tasted a Gallo and many more yet since I bought one.