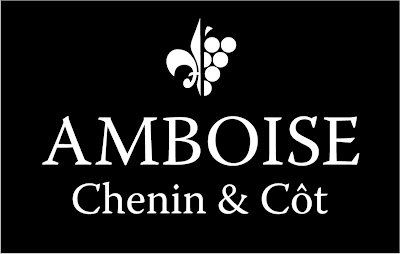 Ambition for a new Appellation 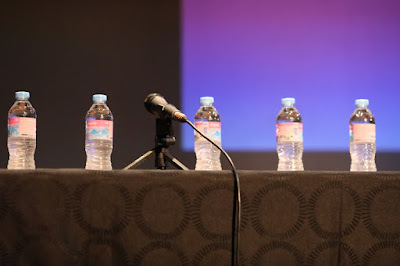 During the heatwave water had pride of place....

On Thursday and Friday (27th and 28th June) I was in Amboise for the conference – Amboise and Côt. Amboise is seeking promotion from Appellation Touraine-Amboise to the cru status of Amboise, dropping the mention of Touraine in a move up the AOP pyramid. The intention is that the new Amboise appellation will be for wines from only two grape varieties – Côt for red and rosés and Chenin Blanc for whites.  It is hoped that this can all be concluded in three years time. I suspect that this timing is optimistic and agreement by the INAO and the French government is likely to take more time.

This week's conference focused on Côt – also known in some parts of the world as Malbec. Côt producers from Amboise were joined by Auxerrois producers from Cahors. Auxerrois is the local for Côt in Cahors and apparently the original name for this grape variety. 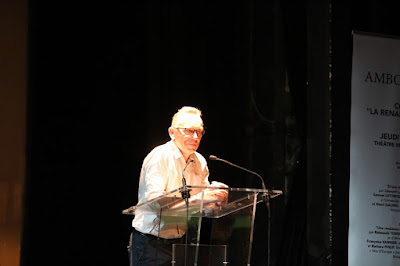 Xavier Frissant, leading Touraine Amboise producer
and President of Touraine-Amboise
A leading actor behind the push for AOP Amboise 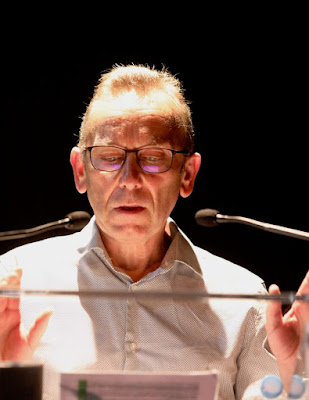 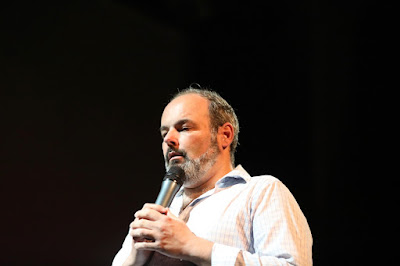 Jérémy Arnaud
Terroir manager from Cahors
and animator of the conference 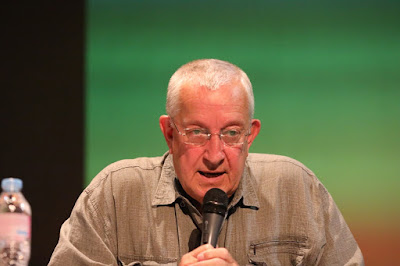 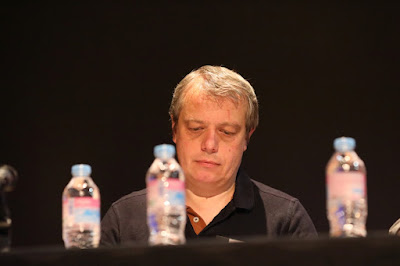 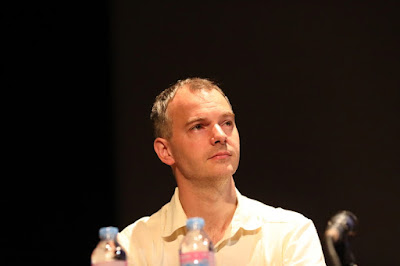 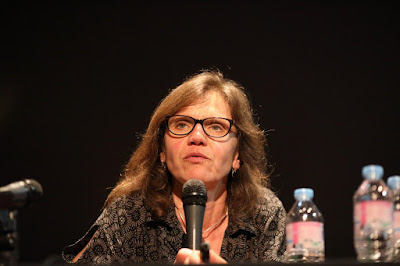 The morning of Thursday 27th was dedicated to a detailed explanation of the origins of Côt and to the similarities and differences between the climate, soils and topography Amboise and Cahors. There were four principal speakers: Henri Galinie (expert in the history of grape varieties in the Loire Valley), Léonard Laborie (historien chercheur au CNRS), Samuel Leturcq (maître de conférence en histoire médiévale à l'Université de Tours) and Françoise Vannier (expert des terroirs, Cabinet ADAMA).

The parents of Auxerrois/Côt are the Madeleine Noir from Charentes and the Prunelard Noir with is origins in south west France. The the first textual mention of Côt in Touraine is in the latter part of the 18th Century. However, according to Henri Galinie, expert in the history of grape varieties in the Loire Valley, it is very likely that it was planted here during the 16th Century.

The name Malbec comes from a Monsieur Malbec, who was either a nurseryman or a a producer or perhaps both who managed to make Malbec a popular variety in Bordeaux during the 19th Century from where it was widely exported to Australia, Argentina and Chile. Hence the current domination of the name Malbec. 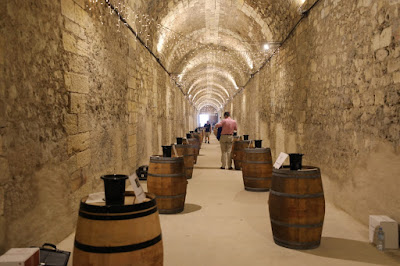 The tunnel under the Château d'Amboise

After a steamy morning passed in the heat of the conference theatre we repaired to the very welcome cool of the tunnel under the Château d'Amboise to taste a range of wines from Amboise and Cahors. My comments on the wines will appear in a subsequent post. 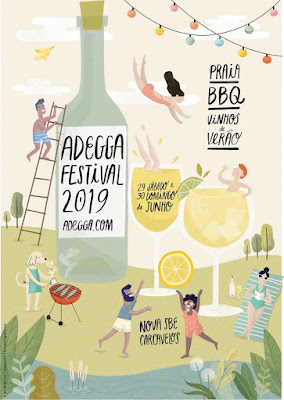 For the first time the Adegga Summer Festival will be held outside Lisbon, itself. Instead it will be at Carcavelos, a beach resort a little to the west of Lisbon down the Tagus. It will be held at the Nova School of Business and Economics, Rua Holanda n.1, 2775-405 Carcavelos, Portugal.

400 wines from 40 Portuguese producers with prices ranging from 5€ to 50€. Saturday 29th from 15.00 to 22.00 and Sunday from 15.00 to 20.00. Carcavelos is on the railway line from the Cais do Sodre station in Lisbon to Cascais with regular service. There will also be a shuttle service from the Miradouro do Parque Eduardo VII to the event venue.

This is a great chance to taste some of the best Portuguese wines as well as meet the people who make them.

Details of the festival here.

Sadly we are unable to make it this year as will be in the Loire for a conference on Côt at Amboise, followed by the Paulée d'Anjou and the Chenin Blanc Conference in Angers. 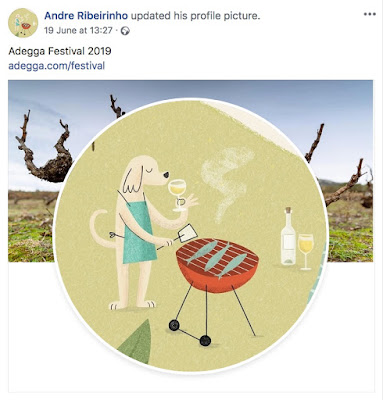 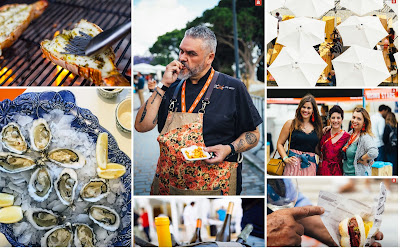 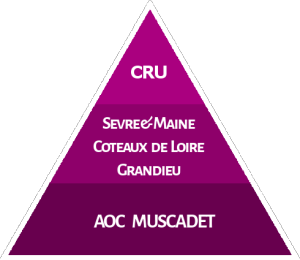 After some considerable delay the next four Muscadet Crus Communaux were finally agreed by the INAO on Wednesday 19th June 2019. They now need to be officially signed of by the relevant Franch minister. Hopefully she or he will soon the necessary pen and the process will soon be concluded. The four new crus are Goulaine, Château-Thébaud, Monnières Saint-Fiacre et Mouzillon-Tillières.

Work continues on three more crus: La Haye-Fouassière, Vallet et Champtoceaux. La Haye-Fouassière and Vallet like the other seven are in the Sèvre-et-Maine, while Champtoceaux is in Muscadet Coteaux de la Loire. The latest news is that Muscadet Côtes de Grandlieu is now getting into the starting blocks in a bid to become the 11th Muscadet Cru Communaux.

The advent of the four new crus should considerably augment the production, which is currently at around 6000 hls from 150 hectares of vines for the three existing crus – Clisson, Gorges and Le Pallet. 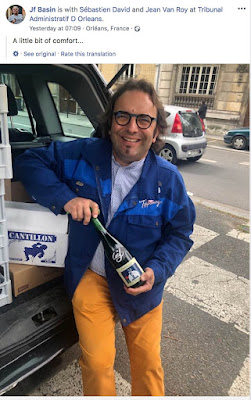 Sébastien David with a bottle of Coëf
yesterday @Orléans


Back in early May I posted about the legal threat to destroy all of the production of Sébastien David's 2016 Coëf, Saint Nicolas de Bourgueil because of an alleged excess of volatile acidity. On Friday 11th May there was an hearing in Orléans when Sébastien attempted to get the order from the Préfete de Indre-et-Loire – Corinne Orzechowski – to destroy these bottles overturned.

The judges decided that this case needed to be heard urgently in greater detail and this happened yesterday in Orléans. Sébastien and his lawyer, Eric Morain who successfully defended Olivier Cousin, made their submissions to the judges, who will apparently give their judgment on 11th July.

Curiously there are now eight analytical results for Sébastien's 2016 Coëf – four above the permitted level of volatile acidity for Saint-Nicolas-de-Bourgueil and four below. It does seem very odd that it appears impossible to obtain and agreed figure.

On May 6th Rémy Bossert launched a petition in support of Sébastien. It has had an extraordinary success now having reached 171,529 signatures. Here Rémy gives an update (21st June 2019).


Update from Rémy Bossert:
'At the hearing on the background of this Thursday, June 20th at the court of great instance in Orleans, the judges listened carefully to the arguments of Sébastien David and his lawyer Me Eric Morain. What would push these judges to order the destruction of these 2078 Bottles?

Is this wine illegal? The measures carried out give 4 results above the limit and 4 below. So he is off-law for 4 measures and compliance with the law for 4 others! What are we talking about: a difference of 0, xx on a threshold set by an outdated law of 1920 and which has no reason to be. In fact, a hundred appellations, elsewhere in France, allow rates of volatile acidity of 25 or 30 (while in Sébastien's case, the maximum measures are 20,5).


Is this wine dangerous to health? No, a rate of volatile acidity has no impact on health. In addition, this 2106 cuvée, has no inputs except grapes, while most conventional wines contain about twenty chemical molecules (Pesticides, etc).

Is the consumer clearly informed about the product? To be informed about a product is to indicate the list of ingredients that make it up. As this wine contains only grapes, Sébastien proposes to add on the counter-Label: " contains exclusively fermented grape juice, without any added inside or sulfite and with a rate of volatile acidity near or slightly above the Upper Limit, following the bottle."

Is this wine drinkable? Just read the comments of cavistes, professionals and amateurs during the trade shows and on social networks to convince themselves.

If the judges, who have to deliberation on the background, have the "sense of good", they will show common sense.

Decision towards mid-July at the earliest.

Like Rémy I hope that the judges show good sense and stop this order to destroy 2078 bottles of Sébastien David's 2016 Coëf Saint-Nicolas-de-Bourgueil. I have to wonder what is behind this move to threaten the livelihood of a Loire wine producer, who is outspoken and campaigns against weedkillers and unnecessary additives in wine.
Posted by Jim's Loire at 11:04 No comments: