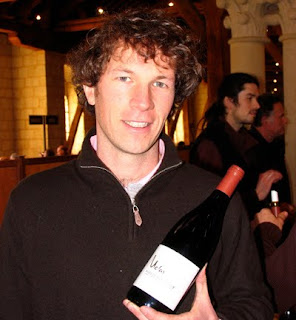 One of the highlights of the Renaissance tasting last Sunday in the Greniers de Saint-Jean in Angers last Sunday was meeting Aymeric Hilaire and tasting his wines. I had initially missed them when tasting at a nearby table but Sarah Ahmed said I should go and taste them and it is a good thing that I always follow the Wine Detective's advice and instructions.  I had also previously been  told about the Clos Mélaric wines, so it was good to be reminded.
Originally from Saumur Aymeric is an oenologue and worked for a number of years in Côte Rotie and in Banyuls before returning to Saumur in 2005. He spent three months working for Bernard Baudry in Chinon. Initially he and his partner Melanie had 3 or 4 hectares in Saumur-Champigny but that didn't work out, so in 2006 they bought 4 hectares in Le Puy Notre Dame. They have 2.5 ha of Chenin Blanc and 1.5 of Cabernet Franc.

We started with the Chenins. The recently bottled 2008 Bulles de Roche was the first. This is aged in 400 litre barrels that have been already used for three to six wines. The 2008 went through malo and has 5 gms of residual sugar. It has attractive rich fruit and balance. The 2008 Clos de Chesnaie is a step up. The vines in the Clos are 45 years old and the yield in 2008 was between 20-30 hl/ha. The Clos has more clay and produces strong wines – the 2008 has a rich concentration of quince fruit and good length. It still needs time but it has a lot of potential.The 2009 picked on 25th September is quite austere at present but the fruit and acidity are all there, so they should all come together.

As an interlude I tried the Globules Rosé – a pet nat, which has easy, agreeable strawberry and raspberry fruit. Then onto two reds from 2008 – both 100% Cabernet Franc. Firstly Tandem, which has recently gone through malo, that has some plummy fruit and length. Then the more impressive Belles de Roche from 45 year old vines planted where there is less soil before reaching the limestone. This has powerful concentrated, supple black fruits and promises to be a good bottle.

Not everything is completely successful but it is early days both for the domain and the wines. However, definitely a name to follow.