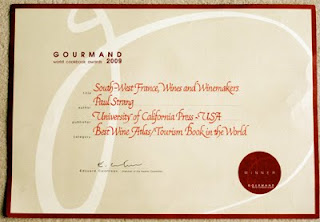 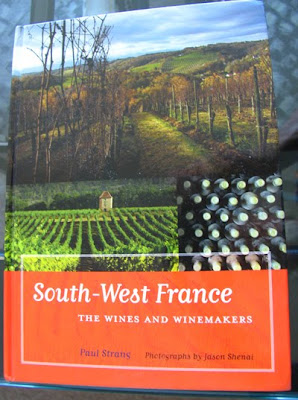 Richly ironic that UK company Grub Street declined to publish this, so it went to the University of California.

It is also ironic that as usual it is impossible to find the full results on Gourmand Awards website. You would have thought that an organisation that give awards on communication would have sorted out their own communications – apparently not! 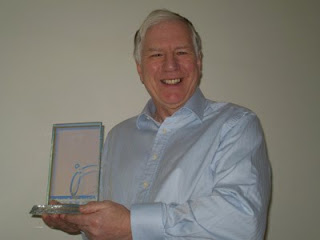 Keith Grainger with his trophy
Congratulations also to Keith Grainger on winning the award for the ‘Best Wine Education Book in the World’ for his Wine Quality Tasting and Selection published by Wiley-Blackwell.
I only learned about Paul and Keith's awards because they contacted me – still no response from Gourmand for a complete list of winners and on their site the winners appear only to be listed by country but no convenient list of overall winners.
Posted by Jim's Loire at 16:49

I'm really enjoying this book at present, he says what he thinks which makes a refreshing change these days. His love of the region shows through and I'm desparately searching some of his recommendations. Good news.

Alan. I agree it is good to see that Paul speaks his mind and his long established love and enthusiasm for South West France.

Agree with Alan. This book is full of interest, has wonderful descriptions of the producers and their wines. The local history features too.

Haven't yet read this book, but Paul Strang's earlier book on Languedoc-Roussillon is the most interesting and useful wine book I have yet encountered. I'm on my third copy - first 2were "borrowed". Incidentally, Sieur d'Arques make splendid Pinot Noir - at least I thought they did. Perhaps I know no more than Gallo!!!!

I'd certainly recommend the new book. I imagine that not all the Pinot Noir Sieur d'Arques makes is fake – certainly not that under its own labels.