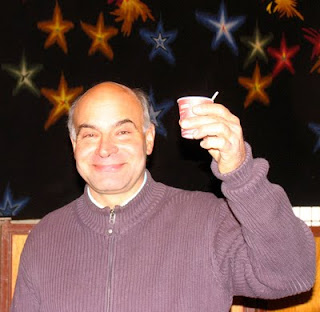 Mark Angeli: one of the movers behind the Renaissance tasting
This annual tasting in Angers just before the Salon des Vins de Loire used to be called Renaissance des Appellations. Now 'des appellations' has been dropped and it has become Renaissance des Terroirs (RDT). An increasing number of the participants have decided that France's appellations are beyond saving and now prefer to sell their wines as vin de table, especially as the new regulations are less restrictive over what can go on the label – vintage, where it was made, etc. They also avoid some of the bureaucracy that now surrounds the ACs. All of the participants at the Renaissance tasting are either organic or biodynamic, although not all are members of RDT. Producers are limited to showing five wines. 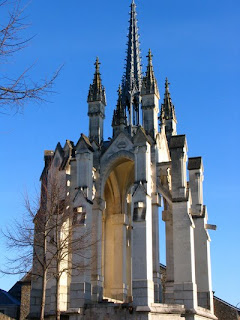 This year we went to the Renaissance on the Sunday morning. With La Dive Bouteille tasting on at the cellars of Château de Bréze at the same time the Renaissance was less packed than usual, so much better for tasting. Incidentally I gather that the Brézé cellars were freezing. 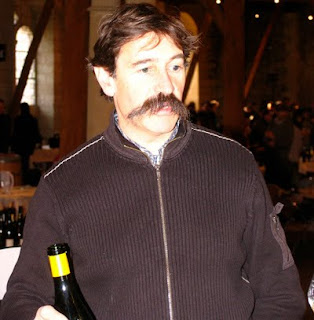 Joseph Landron
I started with the Muscadets of Guy Bossard and Joseph Landron. Of the two, Joseph Landron's 2009s were showing much better at this stage than Guy's which lacked zip. I enjoyed Joseph's very recently bottled 2009 Amphibolite Nature with its zippy, lemony fruit and just a touch of richness – bring on the oysters! The 2009 Hermine d'Or, from vines planted on sandstone, looks particularly promising. It will be bottled in May and currently is quite rich and full with white flower characters. Returning to Guy Bossard I thought the 2009 Othogneiss was the best of the four he was showing.
Of course any comments on the 2009s are very provisional, especially on wines that haven't yet been bottled. I always see tasting notes as a snapshot in time. Notes on unfinished wines are particularly fleeting and transitory.

Next to the wines of Mark Angeli (La Ferme de la Sansonnière in Thouarcé). Understandably, once the Renaissance tasting starts to fill up, it is often virtually impossible to get anywhere near to the table of the sage of Thouarcé, so we took the opportunity to taste Mark's wines early on. I have long been a fan of these wines, although there was a time when Mark wasn't using any sulphur and opening a bottle could be a bit of a lottery. I think Mark's wines are now better than ever as the three 2008 whites I tasted showed. All had a greater precision and minerality than previously starting with Claire de Lune. Of the three, Les Fouchardes was my favourite showing a lovely combination of concentration and delicacy plus length and power. We finished with the Vieilles Vignes des Blanderies – bigger than the other two and needing more time but a lot of potential. For a more detailed account of Mark's wines see Chris Kissack's report.