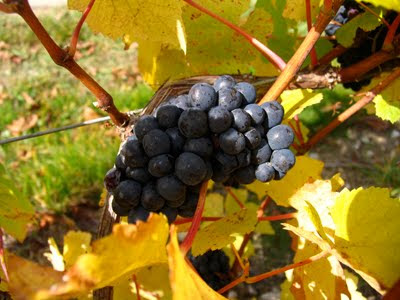 True Pinot Noir – Sancerrre October 2008
Reading part of the judgment makes depressing reading, particularly the role that Sieur d'Arques played in the fraud. Having visited Sieur d'Arques on a number of occasions during the 1990s including for their innovative Toques et Clochers auction of barrels of Chardonnay, I had always been impressed and felt that they were a model co-operative. Sadly it would appear, despite the continued denials by Pierre Mirc, president of the co-op, and Alain Gayda, the managing director, that they were up to their necks in the scam.

Gayda and Mirc claimed they had no idea how much Pinot Noir is planted in Languedoc-Roussillon nor how much is produced. They claimed that as vin de pays was only a marginal part of their business – less than 10%, especially bulk sales their interest was devoted to Sieur d'Arques more prestigious products.

Neither the French fraud squad nor the court were over-impressed by this line of defence. In addition to being president of one of the leading cave cooperatives in the region Mirc is a representative on the INAO, the Fédération Départmentale des Caves Cooperatives and the Syndicat des Producteurs de Vins de Pays d'Oc.

Reading the court summing up you might conclude that Sieur d'Arques know nothing and care even less about Pinot Noir, which is rather curious as Pinot Noir features as part of the blend in no less than six of their Crémants de Limoux – Blason Rouge, Blason d'Arques, Bulle de Crémant Rosé (10% Pinot Noir – limited amount because PN isn't widely available in the region?), Diaphane Grande Cuvée and Crémant Sieur d'Arques Brut and Extra Brut. Admittedly these are AC wines, so perhaps they take more care over its origins.

Gayda's defence was further undermined by Sieur d'Arques oenologue, Christelle Della'Ava, handing over a copy of an email received by Alain Gayda on 28th October 2005 from ONIVINS detailing how much Pinot was planted in Languedoc-Roussillon. Gayda had asked ONIVINS how much Pinot was planted. Gayda passed on a copy of this email to Christelle Dell’Ava, who was then Sieur d’Arques chief oenologist in charge of the bulk Pinot market). Gayda wrote ‘confidentiel !!’ in the margin. What could possibly be confidential about the plantings of Pinot in Languedoc-Roussillon unless you were already in the process of setting up the fraud?


The information from ONIVINS would have told Gayda that the maximum amount of Pinot that could be produced in the region was 67,680 hls. The court notes that Sieur d'Arques had already sold, according to Gayda's testimony, 10,000-12,000 bottles of Pinot under their 'Red Bycicle' brand. In 2006 Sieur d'Arques bought 53,989 hls from Ducasse, the Carcassonne négociant at the heart of the fraud. Then in 2007 they bought 75,376 hls from Ducasse. Sieur d'Arques sold to the Americans a total of 124,894 hls (16.6 million bottles).
Leaving aside the maximum figure for the annual production of Pinot Noir in Languedoc-Roussilon, the fraud enquiry estimated that the region produces between 55,000 to 60,000 hls of Pinot. In 2006 Ducasse bought 53,889 hls of 'Pinot' – 93.34% of the total Pinot available on the market in Languedoc-Roussillon. The following year that percentage rose to 132.87%. Of the growers who supplied Ducasse and who were charged with the fraud, only Vignobles Alain Maurel (Domaine Ventenac and Château Ventenac in Cabardès) has any Pinot planted and then only a minimal amount as there appears to be is no mention of it on their website and certainly isn't listed as a component in any of their wines. 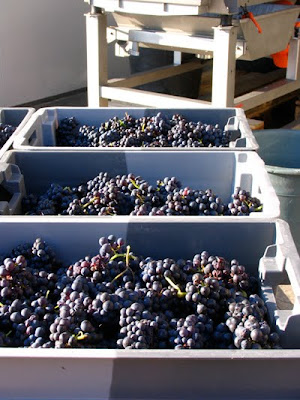 True Pinot Noir awaiting sorting in Sancerre: late September 2009
Sadly the ringing declaration on the home page of Vignobles Alain Maurel now rings a little false: 'La démarche qualité doit être construite du raisin å la satisfaction du client. L'élaboration d'un vin est une chaine où il ne peut y avoir de maillon faible.' (A qualitative approach must be built up from the grape to the customer satisfaction. The elaboration of a wine is a chain where there can be no weak link. Quality cannot be claimed, it proves itself.'


*
In all of this it still remains a mystery exactly how much of the fake Pinot Noir was bought by Constellation Wines and Gallo. Constellation say they bought 10% but claim that what they bought really was Pinot Noir, while Gallo say that they purchased less than 20%. If these claims are correct then we don't know who bought more than 70% of the fake Pinot, assuming that all of it went to North America. The answer has to be in Sieur d'Arques records as they bought the vast majority of Ducasse's fake Pinot. It may also be in the court judgment – unfortunately I have only part of this.
Posted by Jim's Loire at 17:10

yeah where did the other 70% Go, It just disappeared.....mmm

Gotta love how Constellation Wines and Gallo are both trying to say they only bought a little, something ain't right

Weston. Certainly greater openness from Constellation and Gallo would be good. But we shouldn't be just focusing on them: those convicted of this very substantial fraud remain in post.