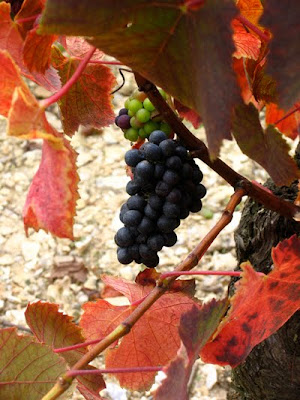 True Pinot Noir: Sancerre
I see that the court in Carcassonne today passed sentence on those convicted in the fake Pinot Noir scam. Oceans of Pinot Noir were sold by various organisations including the cooperative Sieur d'Arques in Limoux and Ducasse, a négociant at 4 Avenue Thomas Edison, 11000 Carcassonne to E&J Gallo for their Red Bicyclette Pinot Noir.
France's fraud department became suspicious during an audit at Ducasse when they discovered that Ducasse were buying Pinot Noir at 58€ per hectolitre when the normal market price for Pinot Noir was 97€, while local grape varieties could be bought for 45€. It also emerged that more Pinot Noir was being sold to Gallo than was produced in the whole of the Languedoc – around 50,000 hl a year. It is only in the cooler areas of Limoux that Pinot Noir can be successfully grown – the majority of Languedoc-Roussilon is far too hot for the Burgundian grape. Patches of Pinot Noir, however, can be found in various parts of the region. On 7th February 2009 Agrisalon reported that every year a company based in Limoux sold over 100,000 hls of Vin de Pays d'Oc Pinot Noir to the North American market.

The 12 defendants were found guilty of selling 18 million bottles (135,334 hectolitres) of fake Pinot Noir to Gallo. The fraud ran from January 2006 to March 2008 and during this time the defendants made a 7€ million profit. The court today handed down suspended jail sentences of between one and six months and levied fines of between 3000€ and 180,000€. Claude Courset of Ducasse received a six month suspended sentence and was fined 45,000€, while the Sieur d'Argues Co-operative was fined 180,000€. Sadly Sieur d'Arques used to have a high reputation and appeared to be a model co-operative.
There have recently been some suggestions that executives at E&J Gallo should have realised that they were being sold fake Pinot Noir. This seems to me to be terribly unfair – why should Gallo executives be expected to tell the difference between Pinot Noir and Carignan and Alicante Bouchet? Actually it was apparently Merlot and Syrah but given the size of the scam there might well have been some Carignan in it.

It is very sad that this scandal will have confirmed some people's view that wine is all about fakery and will hit all French wine, in particular the region of Languedoc-Roussillon. It undermines the efforts of many independent wine producers throughout France. The sort of producers that this blog hopes to play a part in celebrating and promoting.

See also Michel Smith's posting about the glories of Languedoc-Roussillon.
Posted by Jim's Loire at 23:03