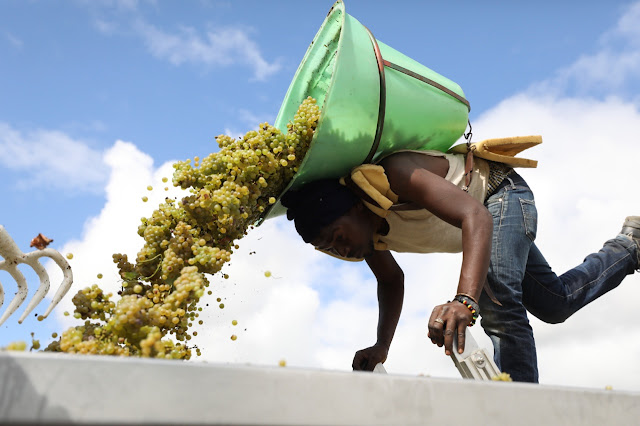 From the 2018 vintage @Domaine Luneau-Papin
They start tomorrow

Unfortunately for a number of reasons I am going to miss the start of the Loire harvest this year but hope to get out to the Loire in mid-September, although we may have to quarantine for 14 days if France imposes restrictions. The 2020 harvest looks promising both in quality and quantity, which should help producers hit by frost in 2017 and 2019.

We made a morning visit to Domaine Miolanne on our second and last full day in the Côtes d'Auvergne. The evening before in a bistro/wine bar in nearby Champeix we had drunk their sparkling – Bulles de Miolanne Brut – for our apéro and found the dosage too high for our taste, so I had a slight reservation before our visit. Happily this was put to rest during our visit.

Domaine Miolanne was established in 2012 by Laure Cartier and Jean-Baptiste Deroche. Laure comes from a family of vignerons –  Mas de Gourgonnier in Les Baux de Provence, while Jean-Baptiste is an oenologue. Since 1990 there had been a five-hectare domaine here. Miolanne now extends over 17 hectares with 10 hectares of vines and five of cereals. Laure and Jean-Baptiste immediately started converting their domaine to organic viticulture achieving certification in 2016. In 2014 built their wooden chai, which includes a tasting area and a wine bar, which is open during the summer.

The domaine, which is at around 450 metres, which means that there is a considerable range of summer temperature between the day and night, which helps to keep acidity in the grapes. There is a range of volcanic soils: lava, basalt and pumice as well as clay-limestone. Their oldest vines date from 1940. Unfortunately they were hit by frost in 2017 – their vineyards are relatively flat. Then by drought last year leading to a loss of 65% of a normal crop. In the generous 2018 vintage they produced 50,000 bottles, while in 2019 just 20,000.

Lying in the rain shadow of Le Mont Dore and Le Puy de Sancy the average rainfall is here is 450 mm. Overall this part of the Auvergne has less rain than other areas of the Loire. For example the weather station at Clermont Ferrand recorded an average rainfall of 578 mm between 1981 and 2010 this compares with an average of 695.6 mm at Tours.

Miolanne has a range of of grape varieties: 3.5 hectares each of Gamay and Pinot Noir, a hectare of Chardonnay, 0.5 ha each of Gewurztraminer, Pinot Gris and Syrah. With Laure we had a quick tour of the vines as well as a disused quarry close to one of their vineyards.

The disused quarry
(above and below)

Unfortunately hail storms are a regular threat here and part of Miolanne has hail netting protection covering a plot of young vines. The netting, which is approved by the INAO, can be lifted for the harvest, it does slow grape maturity slightly by two or three days says Laure. It is no surprise that it is expensive: 15,000 € per hectare.

2019 D–Miolanne VDF
This is an unusual blend of Chardonnay and Gewurztraminer plus a little Pinot Gris, which is fermented and aged in barrel. From vines ob pumice it has citric aromas, attractive texture and floral notes.

2019 Volcane Rosé, Côtes d'Auvergne
An equal blend of Gamay and Pinot Noir and a pale pink, this is another successful rosé from the Auvergne – well balanced attractive red fruits and a fresh finish with some saline notes.

2019 Volcane Rouge, Côtes d'Auvergne
Also an equal blend of Gamay and Pinot Noir, this is very much a juicy, easy drinking vin des  copains with some smoky notes.

2019 Basalt éphmère
100% Gamay and vinified by carbonic maceration resulting in sweet ripe quite concentrated black fruits with a slight bitterness in the finish that adds interest.

Hors Piste, PetNat, VDF
Made from 100% Gamay and vinified this crisp, lemony, extra brut PetNat was to my taste much more exciting and enjoyable than the Bulles de Miloanne that we had drunk the previous evening.

Domaine Miolanne is another domaine which underlines that the Côtes d'Auvergne and the other appellations of Upper Loire are well worth exploring.