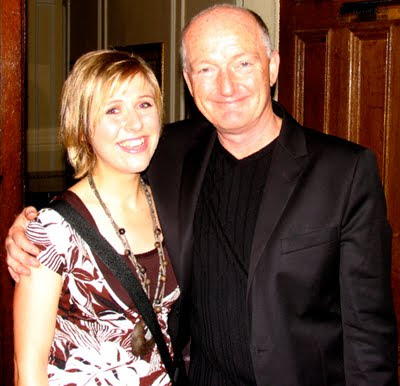 Rebecca Gibb with Oz Clarke in November 2006 when she won the 2006 Young Wine Writer Award
The Facebook group founded on 8th February by freelance wine journalist, Rebecca Gibb, has just topped the 1000 mark. Rebecca set up the group following the news that Tim Atkin, one the UK's most respected and successful wine writers, was having his long standing column in the Observer slashed.
Attracting 1000 members in around 10 days is becoming a solid indication that The Observer has miscalculated – Tim is one of the bright points in the increasingly lacklustre paper, which this weekend is hoping to revive its fortunes with a relaunch. In ditching Tim's weekly column in the Observer magazine, the Observer's editor, John Mulholland and his management team have shown that they have chosen the wrong set of deckchairs to hurl overboard.

I fancy a fair few of the 1000 members may cease to buy The Observer if it does not have a proper weekly wine column. Also I gather that John Mulholland, the editor of the Observer, is aware of the growing row about the axing of Tim's column. At a conference to unveil the new look Observer he admitted that there was "an unholy row about the wine column"!
If you haven't already joined and would like to see wine columns continue in newspapers around the world, please join by following this link.