The tyranny of French sommeliers? 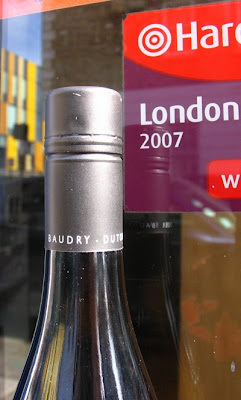 Yesterday there was this telling comment on the wine-forum of Tom Cannavan’s wine-pages about some 2007 Vouvrays that he bought from Bernard Fouquet:
‘Mark Henderson: I bought a mixed case of Aubuisieres but my only reservation has been that both the Silex and the Girardieres (demi-sec) are under plastic cork.’

I certainly agree with Mark’s reservations about putting plastic corks into good quality Vouvray that is capable of aging well over several decades. Pull the cork on either of these two wines in 10-15 years they may well be badly oxidised under these plastic corks. Even after five years this may well be the case. Surely the better option to avoid the problem of corked bottles would have been to go to screwcaps.

Unfortunately the take-up of screwcaps in the Loire, outside of the big groups, has been slow despite many of the white wines being ideally suited. The opposition of many French sommeliers to screwcaps may have played a significant role here. During the Salon des Vins de Loire Jean-Marie Bourgeois told me that he was surprised by the sommeliers’ continued opposition, while Pierre Sauvion (Château du Cléray, Muscadet de Sèvre-et-Maine) said he would move to screwcaps if there was less resistence to it from sommeliers in France.

Fed up with the incidence of corked wines, a number of Loire producers have opted for plastic corks – not really a problem for wine to be consumed young, although these corks can still be difficult to remove from the bottle – but certainly a mistake for wines capable of medium to lomg-term aging.

I suspect the sommeliers’ opposition is largely about protecting their roles by guarding the mystique that can be built up around extracting a cork from a bottle and checking that the cork hasn’t spoiled the wine. If I am right then they will have much to answer for if good Vouvray turns out to have been oxidised because of the use of plastic corks.

2007 Chinon Blanc, Baudry-Dutour
Good to see that leading Chinon producers, Baudry-Dutour, have put their 2007 Chinon Blanc into screwcapped bottles – an admirably modern and stylish presentation. Screwcapped bottles do not have to look cheap.
•••
Elsewhere pertinent comments by Michel Smith about blending white and red to make rosé on Hervé Lalau's blog.
Posted by Jim's Loire at 15:03

I've had several bottles of the 2002 from the Vouvray cave cooperative in the last 2-3 years, purchased in 2003-5. Strangely, some of them had plastic corks and some had natural. Most of the plastic corked wines were oxidised; none of the natural corked bottles were.
Two bottles of Jurancon Sec Domaine Cauhape 2005 under plastic cork were also badly oxidised.
I can't see why producers go for plastic!

Jim, do you have any more technical information about the problems of oxidation and the use of plastic? I hate plastic corks - as you rightly point out they can be impossible to get out of the bottle. An Australian winemaker (with a chemistry based PHD) I worked with was very against them as she claimed wines have to be more robust corked under plastic as plastic is a polymer and polymers absorb flavour.

Jim, you might like to make a note that our Sancerre supplier,Serge Laporte in Chavignol, moved to screwcaps in the 2007 vintage at our request. A French vigneron who listens! They have, needless to say, gone down a storm with our customers - with the exception of les 'sommeliers français'! Exceptionally good wines as well - have you tried them?

Tasting Room: The Australian Wine Research Institute did a big research project into closures and plastic closures performed poorly – oxidation problems. You can contact Jamie Goode who keeps up to date with closure research.

Chris. Thanks for your comment – I haven't tasted Serge's wines recently I'm afraid.

There are a number of Loire producers using screwcaps: eg Henri Bourgeois for Petit Bourgeois, Luc Choblet for all of his Muscadet and VDP, and Jérôme Billard for his Chinon Rosé to name a few.

Jim,
Oddly enough, Aubuisières' Vouvray "Cuvée de Silex" (one of the wines you've cited with plastic corks) is bottled under screwcap for the US market (as brought in by Weygandt-Metzler Imports). I've enjoyed several fine bottles of the '07. To open up another can of worms, though, our friend Mike (at The Schist) reported encountering a corked bottle of this very same wine, even though it was under screwcap -- a possible case of environmental/airborne TCA infection. You'll find our discussion in the comments section here.

Many thanks for this details David. I agree TCA infection from wood or cardboard seems the most likely explanation.

I had the pleasure of being able to purchase some 2005 Domaine de Baumard Quarts des Charmes and Coteau de Layon Clos de St Catherine under screwcap - both will likely outlast me and have every chance of doing so under this closure.

As an aside, Michael Brajkovich MW of Kumeu River wines did significant trials with as many types of plastic closure as he could find some years ago and the results were awful with oxidation and plastic taint widespread.

Thanks Mark. I should have included Florent Baumard in the list as he was the first high quality Loire producer in the Loire to opt for screwcaps. I wrote a news item for Decanter at the time.