Wine on the internet: the battle against craziness goes on 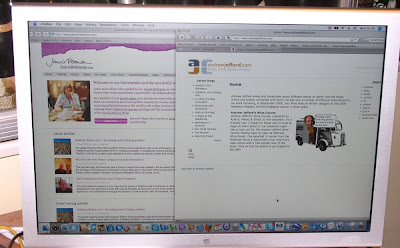 Jancis Robinson and Andrew Jefford: Could these sites be banned in France and their authors arrested?
Although the French wine industry last week saw off the absurd proposal that there should a charge for all wine tastings – both professional and amateur – the war is not yet won. The legality of mentioning alcohol on the internet has still not been resolved. It seems likely that the French Parliament will make the mention of alcohol on the net legal but it may be severely circumscribed. There is an amendment from UMP Yves Bur from Alsace (Bas-Rhin) and the socialist deputy Jean-Marie Le Guen (Paris) that would restrict the mention of alcohol to only those sites run by producers or négociants.

This would mean that all wine sites run by writers/journalists, magazines, all blogging sites except those run by producers or négociants would be illegal in France. This would presumably mean that eRobertParker, the Wine Spectator, Jancis Robinson, Tom Cannavan’s Wine-Pages, Jamie Goode’s Wine Anorak etc. etc. would all be illegal in France. So, too, presumably any mention of alcohol in on-line newspapers. 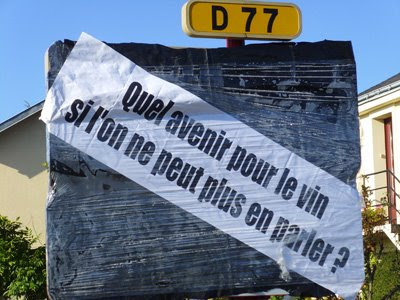 'What future for wine if you can no longer talk about it?'
Good and pertinent question on a road sign in Anjou last summer
(photo from Micaela and Sue, La Grande Maison)
It would also hit other types of site, tourist sites for instance, that are likely to mention wine or spirits like Cognac, Armagnac or Calvados.

As all wine sites can be accessed in France does this mean that anybody running a wine site anywhere in the world, who is not a producer or négociant, will be breaking French law? If this is case will Robert Parker and Jancis Robinson, for example, be in danger of arrest and being dragged before the French courts next time they visit France?

It's just bizarre! It presumably means that even sites like mine, which focus on life in a small town in France cannot mention alcohol. What about mentions made in the past, prior to the law? Presumably that makes the site illegal too. Too stupid!

Do we need to be working on a list of code words and euphemisms? :-))

if the amendment was passed I presume it would make your site illegal or in contravention of the law if you mentioned alcohol – even the bottle of local wine you enjoyed at the local restaurant.

It would certainly make Jim's Loire illegal along with almost all other blogging and wine sites.

As things stand it is far from clear whether wine and other alcoholic drinks can be mentioned on the web as far as French law is concerned as they aren't exempted under the Loi Evin (1991).

As you say bizarre and absurd. As bloggers we need to do our bit to highlight this craziness!

Too right, Jim, that bloggers and anyone with an internet presence of any sort must highlight this. This has been discussed by the French for a long time now, but there does not seem to be sufficient international awareness. Have tweeted your blog post and posted on my Facebook page too. Everyone: spread the word via all means possible.

Thanks Wink. Should highlight that prominent personalities like Robert Parker, Jancis Robinson and Michel Bettane could be liable to arrest in France.

This is just unbelievable. Having just spent the past 2 years getting to grips with the language and French administration in order to launch a French SARL completely devoted to promoting the region and its wines - now we hear that our website might not be legal. Much as we love the French, they are ludicrous at times. Talk about shooting themselves in the foot.

As I say strictly speaking all websites that mention alcohol may be currently illegal in France.

It is clearly crucial that the French parliament comes to a workable and sensible decision about this asap. Unfortunately given the current pressures and contradictions, this may not happen.

All of us on the net should spread the word about this lunacy.

I guess if one is going to shoot to shoot ones self in the foot they should at least do it right! :) Let's lobby so that all "french alcoholic" products can't be mentioned online, saving Spanish and other countries products from a life of crime! That would make them happy and continue to encourage the destruction of one of France's most important cultural landmarks.

In the end I suppose this means you can't treat wounds with alcohol, when telling people how to administer first aid online. Retailers of alcohol lamps will be scrubbed from the search results. Wine.com and it's employees can no longer tour french vineyards! Oh wait, tour companies can no longer mention that they off tours to wineires? Restaurants no longer will have wine lists, but "controlled substances lists"?

Maybe wikipedia will be under suppeona for mentioning that wine exists?

I do love the french, their w*ne and br*ndys, but what are they thinking? This is truely insane!

Ugh. The Continent should leave Nanny State tactics to England. We're just not good at it over here.

Thanks Ryan. As you say 'insane'.

missexpatria – you may be right but France has had the dreaded Loi Evin since 1991!