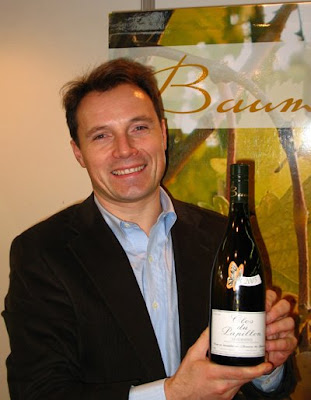 Florent Baumard with his screwcapped Clos de Papillon, Savennières: Salon des Vins de Loire 2006
Sunday's posting on the tyranny of French sommeliers has provoked considerable comment – the closure debate is far from over! So I thought it was timely to post a news item I wrote for decanter.com back in February 2006 that covered Florent Baumard's brave move to opt for screwcaps.

Top Loire wines go into screwcap: (9th February 2006)
'One of the best estates in the Loire has sent shock waves through the wine establishment by moving its entire production to screwcap.
Domaine des Baumard in Anjou, recently selected by Robert Parker as one of only three Loire producers to qualify for inclusion in his book The World's Greatest Wine Estates, is the first top quality Loire producer to opt for screwcaps.

Until now only a few of the larger Loire producers like Vinival/LaCheteau, part of Les Grands Chais de France, and Allliance Loire have chosen screwcaps and only for their cheaper ranges.

Baumard is using the new high quality Stelvin. This closure has only recently become available and is designed to look more like a traditional closure than screwcap. 'From next year all of my production will go into screwcap,' Florent Baumard told decanter.com.

Reaction to Baumard's move was mixed. Many producers like Eric Morgat (Château du Breuil), Stephan Branchereau (Domaine des Forges) and Michel Villedey (Langlois-Chateau) were interested by the move, and described the new closure as 'classy'.

Others, like Henry Marionnet, were aghast at the idea of two of the Loire's most renowned wines going under screwcap.
(from decanter.com)
Posted by Jim's Loire at 10:00

Have you come across the Zork? Some friends are trialing it in France at their vineyard near Beziers - Chateau Malaudos - see :

I came across Zork about three or four years ago at the London Wine Trade Fair. They now have two versions – one for still wines and one for sparkling.

Will be interested to hear how your friends get on with it.

Hey it's an Australian product :-) I'm off to my mother country this afternoon, btw. Do you want me to raise a glass of anything in particular when I get there? I'm taking a bottle of our local Domaine de Ris crémant – hope it survives the trip!

On a more serious note, I'm a big fan of screwtops, and not a fan of plastic corks, but as someone involved in the world of nature conservation, I fear for the remarkable cork forest habitats of Portugal and Spain, which need to be traditionally managed to survive, and for anyone to bother traditionally managing them, the cork must be worth something. My understanding is that the producers have cleaned up their act and are now providing a high quality product, but longterm damage to the industry has been done by their sloppy attitude in the past.

I'd be interested in your thoughts on this issue Jim (pm me if you prefer).

Susan. Certainly an Australian product. I agree with you about plastic corks and like screwcaps – have tasted old Australian Riesling from Yalumba, which was closed with a screwcap – extraordinarily freshness after 25 years but with characteristic petrol aromas.

The Portuguese have recently worked to improve cork but TCA isn't the only problem – bottle variation with cork is a big issue. There are other uses for cork than closing wine bottles. The Portuguese need to develop markets for this rather than hiding behind specious environmental arguments.

Have a good trip to Australia.

At the beginning of 2007, I tasted a Saumur Champigny 2005 by Paul Filliatreau which was bottled under screwcap, "La Combe aux Fées".

Is it just me, or does it bother anyone else that your wine is in contact with a PVDC (polyvinylidene chloride) film? How does this material act in the presence of wine over 5, 10, 20 years? I can't seem to find any literature on this.

Kevin. Thanks for your comment. If you do a google search on PVDC you will find some discussion on this topic, particulary in relation to the NZ screwcap initiative. I don't know what the current opinion on wine and PVDC is but will try to find out.

QdChaume '04 under Stelivn? Not all of it, I suppose, since what I bought was under cork (sadly).