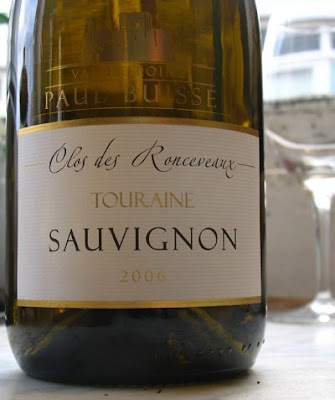 You’ll find the Clos des Ronceveaux just above the cellars of Paul Buisse at the eastern end of Montrichard and facing south across the Cher Valley. The 2006 Clos des Ronceveaux, Touraine Sauvignon is 100% Fié Gris or Sauvivignon Rosé – also called Sauvignon Gris. Although a high quality variety, Sauvignon Rose is now rare having been pushed out by Sauvignon Blanc.

The Clos des Ronceveaux is vinified and aged in barriques for a year and has attractive rich fruit and delicate aromas of yellow plum. It is delicious now and should continue to be very drinkable for the next two or three years. When I visited Paul Buisse in early January, I tasted the 2007 Clos des Ronceveaux which at that stage was more influenced by the wood. If you have the 2006, I suggest you drink this vintage now and wait a year for the wood and the fruit of the 2007 to integrate properly. Entrance to the Paul Buisse cellars in Montrichard. The Clos des Ronceveaux overlooks the cellars on top of the steep river cliff.
Sauvignon Rose is less aromatic than Sauvignon Blanc – no bad thing as far as I’m concerned especially if it avoids the catty reek of unripe Sauvignon. Its major problem is low yields, which explains why this long-time Sauvignon variant has given way to the more aromatic Blanc. However, Jim’s Loire has already covered the Fié Gris of Jackie Preys (jimsloire.blogspot.com/2009/03/domaine-jacky-preys-touraine-and.html) and the Sauvignon Rose from Eric Chevalier is one of the 2009 Loire Sauvignon Blanc Ambassadors. The Couillaud brothers of Château la Ragotière (La Regrippière, Pays Nantais) also have a Fie Gris in their experimental vineyard. Unfortunately Sauvignon Rose is not permitted in Sancerre, although it has probably long been planted there and a very good prestige cuvée from one of the appellation’s leading producers is 100% Sauvignon Gris/Rose.

It would be amazing if Sauvignon Rose ever makes a real comeback against Sauvignon Blanc. However, I do think there is now enough interest in exploring and rediscovering varieties other than those that are now planted around the world, which will ensure that varieties like Fié Gris/Sauvignon Rose and, I hope, Menu Pineau will now survive. 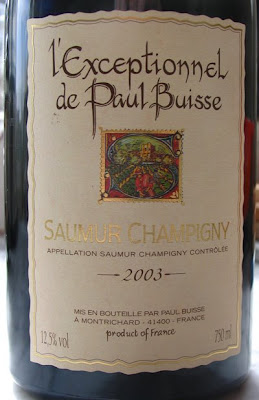 L’Exceptionnel de Paul Buisse, Saumur-Champigny 2003
L'Exceptionnel de Paul Buisse is the company's top of the range reds – Chinon, Bourgueil and Saumur-Champigny. Bought from good producers and matured in the Buisse cellars in Montrichard and overlooked by a tasting committee that includes oenologist, Anne Blain, and Pierre-Jacques Druet, now famous in Bourgueil but originally from Chissay-en-Touraine just four or five kilometres west of Montrichard. Despite this pedigree I have never been impressed with L'Exceptionnel wines. They tend to be clunky, lacking expression and vibrancy – dumb in a word and often dominated by tannin. L'Exceptionnel wines are aged in concrete and do not see any wood.

I opened this 2003 Saumur-Champigny on Tuesday evening and have tried it over the next three nights. On the first night it lacked vibrancy and the fruit was dumb. Interestingly it has improved over the past two days – during the day the bottle was kept stoppered in the fridge. This evening it showed best with much more vibrancy as well as freshness in the finish. Does the L'Exceptionnel need a little more air during its élévage – a little time in wood perhaps? Not to add wood flavours and tannins but to allow the wine to breathe?