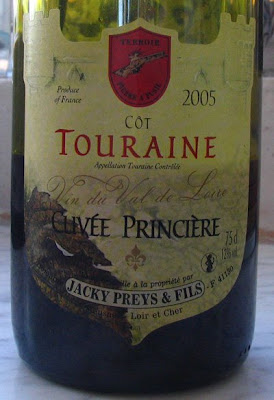 This evening I opened a bottle of Jacky Preys et Fils Touraine Côt 2005 Cuvée Princière. Quite rustic and dusty but does have some Loire Côt (Malbec) character, a thread of acidity running through it and is quite attractive. However, it does not have the same concentration as the Côts from, for example, the Clos Roche Blanche, Domaine Sauvete or Jean-François Merieau (Bois Vaudons). I suspect that the yields are higher. The rather old fashioned label tells its own story.

Jacky Preys and his son Pascal are based in Meusnes to the east of Saint-Aignan at the eastern limit of the Touraine appellation. Over the past 40 years, Jacky Preys has built up the domaine, which now has 75 hectares – mostly in Touraine but some in AC Valençay. Over the years I have tasted Jacky’s wines and found them well made with his Sauvignon Gris (Cuvée de Fie Gris) often being the most interesting. Sauvignon Gris or Sauvignon Rosé is now a rare variety of Sauvignon. There are a few parcels of it in Sancerre, although it is not officially entitled to the appellation.

Right at the end on the Tuesday of the Salon des Vins de Loire I quickly tasted some of the domaine’s wines. The 2008 Sauvignon Blanc Les Pillotières (not bottled) was aromatic, quite rich with a hint of residual sugar remaining. The 2008 Cuvée de Fié Gris (not in bottle) had attractive gooseberry and grassy notes. Then I tried two reds: the easy drinking, juicy 2006 Pinot Noir Cuvée Royale AC and the spicy Valençay 2007, which is a blend of 40% Pinot Noir, 40% Gamay and 20% Côt.

I need to find time this year to go and visit the domaine.