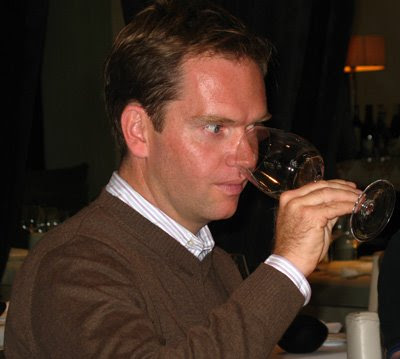 Chris Mullineux
Was very lucky to be invited today to a wonderful lunch at The Ledbury in London’s Notting Hill Gate by Keith Prothero and Chris Mullineux to taste the first wines from their South African project plus taste a spectacular selection of French classics. Details of Mullineux Family Wines here. Of particular interest, of course, is their Chenin. 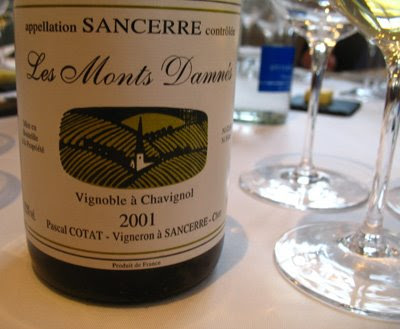 But first to the 2001 Monts Damnés, Sancerre from Pascal Cotat that Keith thoughtfully brought along for me to try. I had mentioned on the forum of Wine-Pages that I had never tasted one of Pascal’s Sancerres although I have tasted and drunk Sancerres from his cousin, François, and when Pascal’s father and his uncle made wine together. The 2001 was very minerally and quite austere without the richness that the Cotat wines often have – a little in the style of François Crochet.

I was asked what the conditions were like in 2001 and was initially stumped and had to think hard to remember. It is funny that conditions in some years stand out such as 1989 the glorious summer and autumn of the bi-centenary, the frost of 1991, the change round in September 2002 that saved the vintage and then the heatwave of 2003. Other years like 1999 and 2001 stick less in the memory, perhaps because they are ‘average’ without really memorable weather. Anyway I did manage to remember that September was wet and difficult, while the weather improved at the end of September and into October. Somewhat the reverse of 2000 when the weather was OK until mid-October when it started to rain and hardly stopped until March 2001.

The 2008 Mullineux White is 80% Chenin Blanc from 44 year old vines with the rest of the blend made up of Grenache Blanc, Clairette and Viognier. The wine is barrel-fermented but not in new wood. It was bottled in December 2008. Although still young, the white is already showing well with some initial weight, partially provided by the Viognier then into a clean grapefruit and mineral finish. 4000 bottles were made. 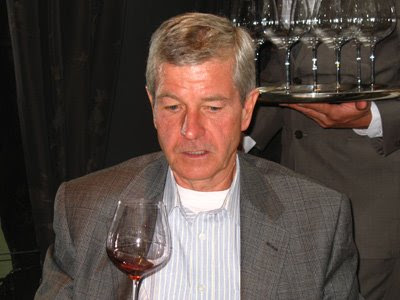 Keith Prothero showing faint anxiety? – unnecessarily as the Mullineux wines showed well
The other Mullineux white is their Chenin Straw Wine. This time it is pure Chenin picked in the first week of February at 23/24 brix (I need to work out what this is in potential alcohol) and then dried for a month. This concentrates both the sugar and the acidity. The 2008 ended up at 48/50 brix and 10 gms of acidity. Fermentation took 3 to 4 months when it stopped naturally leaving 290 grams of residual sugar. 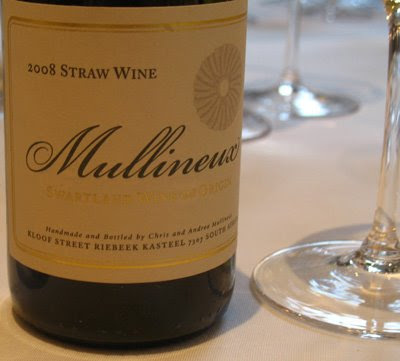 This 2008 Chenin Straw Wine has a lovely balance of sweetness and austerity – rich citric fruits and burnt sugar. It is the level of acidity that keeps this fresh and stops the level of sugar being cloying. Delicious sweet wine and so good was it that it rather overshadowed the 1986 Château d’Yquem that was served afterwards. Perhaps the Yquem would have been better served before the 2008 Chenin. 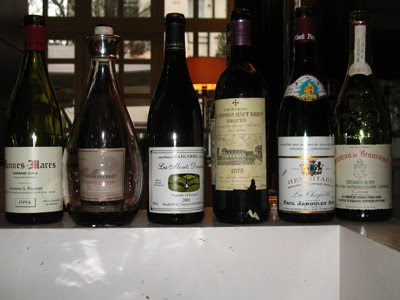 Some of the wines that featured at the lunch

Although obviously still young the 2008 Syrah Mullineux has good concentration with an attractive texture.

Other wines drunk with lunch:


Please see notes on these wines from Lionel Nierop on wine-pages. I'm largely in agreement with him, although I marginally preferred the 1982 Haut Brion to the 1978 La Mission and I thought the 1974 Barolo was well stuffed.

Lovely notes Jim and pleased you liked our wines.
Must repeat this next year for our 2009 vintage and bring along the 2008 to see how they are evolving.

Thanks for your message Keith. Would be good to taste the wines again in a year's time along with the 2009 vintage. Hopefully before that we can get together and taste some good Loire Chenin and Cab Franc etc.