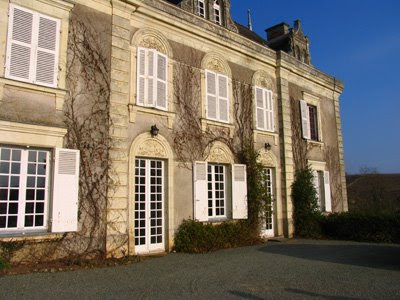 The elegant front of La Roulerie
Following the Renaissance des Appellations tasting at Les Greniers Saint-Jean in Angers, Tom King (RSJ Wine Company) and I headed off to Saint-Aubin-de-Luigné in the Layon to see Philippe Germain at Château de la Roulerie. Although Philippe has been living at La Roulerie since 2001, and since 2004 has been making the wine with his older brother, Thierry (Domaine des Roches Neuves in Saumur), 2008 was the first year they had made wine at La Roulerie. Previously the wine had made at Château de Fesles in Bonnezeaux. 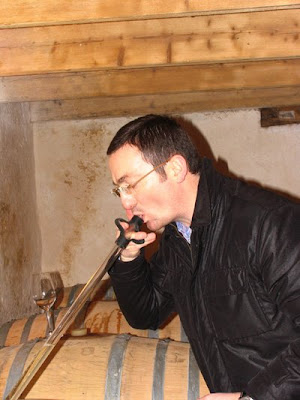 Philippe Germain drawing a sample of 2008 Anjou Blanc
Philippe’s father, Bernard Germain, bought Fesles in 1996 along with Château de la Guimonière and Château de la Roulerie from pastry chef Gaston Lenotre, who died at the beginning of 2009. Lenotre had bought them in a fit of enthusiasm in 1991 following the wonderful vintages of 1989 and 1990, which unfortunately were followed by the severely frosted 1991, very mediocre 1992, average 1993 and difficult 1994. I fancy Lenotre had little inkling of the risk involved in making great sweet wine in the Loire nor that, if you do succeed, it is decidedly difficult to sell.

At the height of his pomp Bernard had 300 hectares of vine – 200 in Bordeaux and 100 in Anjou. Unfortunately Bernard ran into financial problems and last year (23rd June) was obliged to sell Fesles to Grands Chais de France. There had already been a meeting of the family in 2006 when Philippe and Thierry apparently declined to take on Fesles. During the course of our visit I asked Philippe how his father was. His guarded reply suggested that relations between the two brothers and their father at present are unfortunately not good. 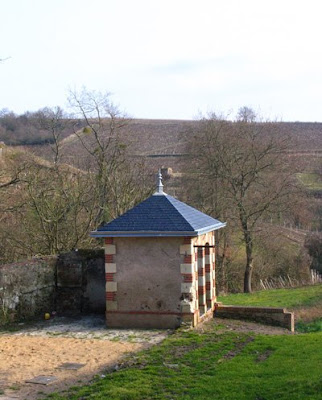 Some of the grounds and the vineyards
First and foremost Philippe is a salesman and this, allied with his natural enthusiasm at making his first vintage at Roulerie in the hastily renovated chai, produced a vintage performance which not even a very painful dental complaint could temper. Following Philippe around the cellar tasting from 400 litre barrels we were regaled with an almost continuous commentary that included frequent repetitions of “chers messieurs”, “très sincerement” and other similar phrases. Apparently wine has not been made here for nearly 20 years since Dominique Jadeau sold the property to Lenôtre. 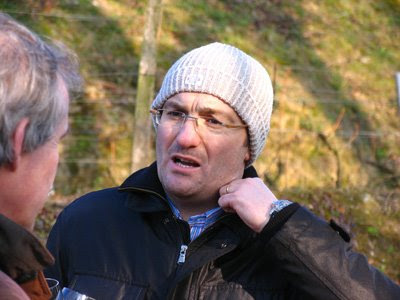 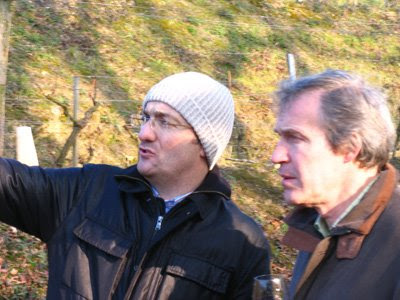 The focus is on Philippe!

We only tasted 2008s including the mineral La Petite Roulerie from vines between 20 and 25 years old that overlook Saint-Aubin and the richer and fuller Les Terrasses, planted on grey schist. We tasted Les Terrasses from both barrel and from a 27 hl wooden conical vat that Philippe has on test. We also tasted the rich, black fruited 2008 Anjou Rouge, which will be bottled in March. “Normally we would make 180 hls of this wine,” said Philippe, “in 2008 we only made 94 hls. We were hit by frost on 23rd/24th April and then later by mildew.” 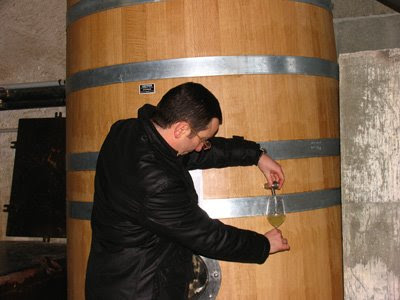 The conical wooden vat
As with other Layon producers the hopes of a good sweet vintage which developed during the fine October weather were cruelly dashed by continuous rain in November. The 1er Tri of the 27th/28th October has 55 gms of residual sugar and is a quite rich blend of honey and citric flavours. It should be an attractive easy drinking Layon to enjoy young.

The Layon was still bathed in brilliantly bright sunshine when we left Philippe to get ready to entertain a group of merchants, out for the Salon, to dinner.