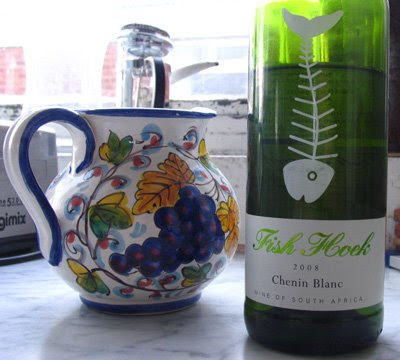 Fish Hoek Chenin Blanc 2008
A couple of bottles on taste yesterday. Firstly the sleek Fish Hoek 2008 Chenin Blanc from celebrated winemaker Bruce Jack in South Africa. Crisp, very well made with some peachy fruit and very attractive to drink as an aperitif or with seafood, although it does lack a little length. Loire producers could note that it is closed with a screwcap, although I was pleased to see that Baudry-Dutour now put their Chinon Blanc into this closure. Fish Hoek retails for £6.19 and is available in Booker, Premiere Retail Club, Somerfield, Somerfield, Spa, Tesco and Threshers. 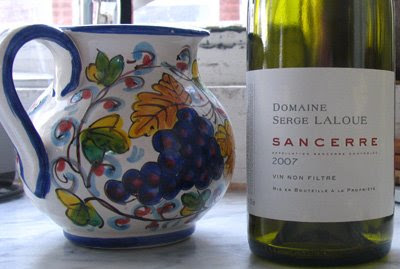 2007 Sancerre Rouge, Domaine Serge Lalou
The 2007 Sancerre Rouge, Domaine Serge Lalou was one of the wines I picked out from the large Central Vineyards tasting I made in Sancerre in mid-December 2008. I have to admit some disappointment with this particulalr bottle. Although it had some weight and was quite impressive for 2007, there was a slight earthiness and an occasional mustiness about it. I don't think it was corked but the cork may have played a part as my notes indicate that it tasted better in December.
Posted by Jim's Loire at 13:43