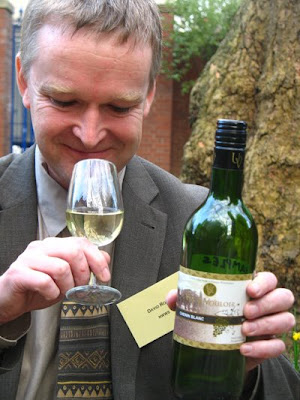 David Rowe and the Indian Chenin Blanc
I tasted my first Indian Chenin Blanc today at a tasting organised by David Rowe’s NWWS (New World Wine Shippers) Adel UK. David was editor of Decanter from 1988 to 1992, when he moved to France and started to develop his interest in making wine. He set up the winemaking consultancy, NWWS, in 1997 with David Kingsbury, who subsequently left the business and moved to Argentina.
The tasting featured wines from a number of unusual countries including India, Kosova, Georgia and Peru. Unusual in the sense that they not often seen in London not, necessarily, in the sense that it is unusual to grow vines and make wine in these countries, especially in the case of Georgia which is one of the claimants to be the birthplace of wine.

Anyway the wine that concerns us here is the 2008 Chenin Blanc, Nashik Valley produced by the India Food Company at Vinchur, Maharashta in a new 25,000 hls winery that was built in 2006. Vinchur is north east of Mumbai. The grapes come from contract farmers in the Nashik Valley. David Rowe has been involved since July 2006.

Unfortunately Indian vineyard and planting stats are difficult to come by. David told me that Chenin Blanc makes up around 50% of the white varieties planted in India. There are some 3000-4000 ha of grape vine vineyard in India compared to 61,000-62,000 ha of table grapes. Apparently the popularity of red varieties is growing and recent plantings now mean that they represent over 50% of the area planted (whatever that might happen to be!). So my guess is that there are around 800 ha of Chenin Blanc planted in India. 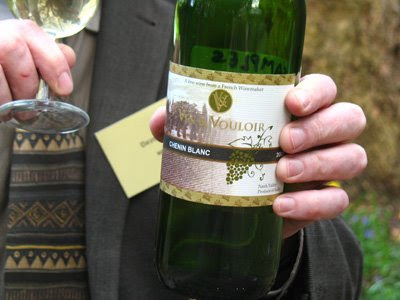 The label says 'A fine wine from a French winemaker'
As David was born in Chistlehurst in South London, this does seem a tad optimistic!
As far as the Vinchur project is concerned, whites make up 30% of the total with Chenin Blanc accounting for 80%. The Chenin is about 10-12 years old, planted at between 500-700 metres and trained on the pergola system. The grapes are harvested in February to March. My instinctive reaction was to stupidly think that this part of India was in the southern hemisphere but, of course, it’s not! The grapes have to be picked before the arrival of the Monsoon season. “During the winter – from October to April,” David explained, “there is no rain, so the vines have to be drip irrigated. Daytime temperatures are around 28/30 during the day and 12/15 during the night.” The 2008 Chenin, which is still in tank, is mid-lemon in colour and with a quite pungent, slightly rustic nose (remember it isn’t bottled). Its taste is more attractive than the nose, with some lemony weight and crisp acidity. It will be bottled in the next 3-4 months, perhaps earlier if they get orders. David told me that with tax and transport costs this will have to retail around £6.99. At this level it will have pretty fierce competition from South Africa.

It was good to catch up again with David, who I first met back in late 1988 soon after he became editor of Decanter.
Posted by Jim's Loire at 20:42