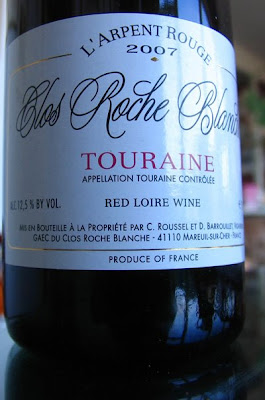 2007 L’Arpent Rouge, AC Touraine, Clos Roche Blanche
Only occasionally do Catherine and Didier make a red from their Pineau d’Aunis. This partly depends upon whether the grapes are good enough but also, probably more importantly, is there enough Pineau d’Aunis to make both their rosé and a red. If there is a shortage, the rosé gets first call. In fact I think they have only made three vintages of L’Argent Rouge. I forget which were the other two vintages – I’ve tried to check but the answerphone is on in Mareuil, so will have to add the details later.

Anyway the 2007, which I opened last night as delicious as indeed the other vintages have been. Typically light coloured with the characteristic, spicy peppery nose of Pineau d’Aunis, this is just a delicious and refreshing drink with a reasonable 12.5% alcohol. It’s one of those bottles that surprise you by how quickly it becomes empty!

Long out of fashion, Pineau d’Aunis has of late been making a comeback and not just in the valley of Le Loir, which has tended to be its recent heartland. It is also called Chenin Noir and is one of the oldest grapes of the Loire Valley. Catherine and Didier used to make the L’Arpent from Chenin Blanc, which was decidedly minerally and quite austere. Hence it made sense to call the Pineau d’Aunis – L’Argent Rouge. Unfortunately their Chenin has now been pulled out.

Though made from an old variety, this is a thoroughly modern wine that works with food but also by itself.