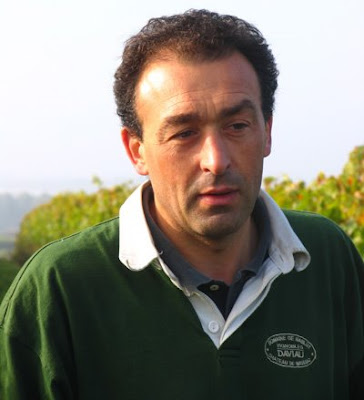 Christophe in serious mood during the harvest@end of September 2008
It is just a short drive from Domaine des Rochelles in Saint-Jean-de-Mauvrets across country to Domaine de Bablut (Vignobles Daviau) on the western edge of Brissac-Quincé – the venue for our last visit of the day with Christophe Daviau. The Daviau family have been growing vines here since 1546. They were also millers. Apparently Bablut means two windmills in old French and there still is an old mill on the property, now used a tasting room. At the end of the 19th century the family ceased to be millers and concentrated on vines and wine.

Christophe studied in Bordeaux and then worked for 18 months in Australia. I first met Christophe in September 1989, soon after he had returned to Bablut to take over the reins from his father, Jean-Pierre. Bablut has around 80 hectares, which have been farmed organically since 1996.

Our tasting on 31 January started with the 2008 Sauvignon Blanc (VDP) – still in tank and due to be bottled in March, which has attractive grassy and gooseberry flavours.

Then on to the mineral 2008 Petit Princé – one of two Anjou Blancs Christophe makes. This is the junior wine, which comes from the well-ventilated plateau at Haut-Perche. Grandpierre, Christophe’s wonderfully minerally and balanced Coteaux de l’Aubance, also comes from this area. Petit Princé is fermented and aged in stainless steel. It matures on its lees, which are frequently stirred to give the wine additional weight. The 2008 will be bottled in June/July of this year.

Ordovicien is the ‘grand vin’ blanc sec and comes from vineyards on schisteous soils. Vinified and matured in barriques, Ordovicien is bottled after 18 months. The 2008 is still fermenting but has a promisingly rich structure. The long and slightly buttery 2007 is due to be bottled at Easter.

The 2008 Rosé de Loire at 11.5% alcohol was attractively light and fruity. Now made from 100% Grolleau, this used to be a blend with 30% Cabernet. Until recently the Rosé de Loire regulations required a proportion of Cabernet. Fortunately this has now been dropped and there are no minimum or maximum requirements as far as the permitted varieties (Cabernet Franc, Cabernet Sauvignon, Grolleau, Pineau d’Aunis, Gamay and Côt) are concerned. Previously a number of Rosé de Loire producers used to ignore the rules, saving their Cabernet for either their red or Cabernet d’Anjou.

The dense, black-fruited 2007 Anjou-Villages-Brissac (70% Cabernet Franc, 30% Cabernet Sauvignon) is still in tank as is the 2007 Petra Alba (100% Cabernet Franc, grown on limestone), which is remarkably concentrated with soft tannins after 70 days of maceration. Bottling is due in March.

We discussed best drinking times for the recent vintages and Christophe suggested that it would be best to drink the 2007 and then wait for the 2006, which is high in acidity, and the 2005.

Because of difficult flowering conditions, Christophe didn’t make Petra Alba in 2008 with the grapes going into the Bablut Anjou –Villages-Brissac instead. However, he did make Rocca Nigra (100% Cabernet Sauvignon grown on schist and slate) as his Cabernet Sauvignon flowered in better conditions, although the yield was under 20 hl/ha. Both of these wines are looking promising, although it is still very early days, especially for Rocca Nigra which won’t be bottled until Easter 2010.

To finish we tasted 2006 and 2005 Rocca Nigra and Petra Alba. In both cases the Petra Alba showed better at this stage with greater delicacy and balance, although all four are rich, powerful wines. Ideally all of them still need at least another two years in bottle and, in the case of the 2005 Rocca Nigra, a minimum of of three years in Christophe’s opinion.