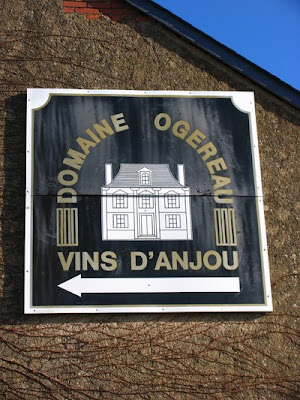 Salon trip report: 31 January 2009
Our next stop was just across the Layon to Domaine Ogereau in Saint-Lambert-du-Lattay. Catherine and Vincent are close friends of Claude and Joëlle Papin and they work together in Savennières on the Clos le Grand Beaupréau venture along with Yves Guignard of Domaine de la Bergerie in Champ-sur-Layon. For the first time Emmanuel, their son, joined us for the tasting. He is now in the middle of his wine studies and is hoping to be able to arrange a stage (work experience) in Oregon.
Vincent started by saying that in 2008 they had only made around 50% of their normal volume, which is never excessive. They expect to make 850/900 hectolitres a year – in 2008 they made only 600 hls.

As usual we tasted through the range – some 2008s plus other vintages – with everything meticulously organised in advance. We tasted the rosés and reds before turning to the whites. Also as usual there wasn’t, with one notable exception that I’ll come to later, a poor wine amongst them.

Particular favourites that I picked out were: 2008 Cabernet d’Anjou: all pretty red fruits and a pure, fresh finish.

2007 Anjou Villages: quite rich for a difficult vintage. The tannins are still a little edgy, so this ideally needs another year or two in bottle. However, equally, with food I’m sure it will be fine now.

2005 Anjou Blanc Prestige (100% Chenin Blanc): while the ‘basic’ cuvée includes 20% Chardonnay. The Prestige 2005 is rich and concentrated and has thrilling energy and precision in the finish. In comparison the 2006, tasted next, although richer and fuller even than the 2005, is more ponderous.

2008 Coteaux du Layon Saint-Lambert-du-Lattay: citric – hints of lime, apple too. An attractive, easy-drinking Layon and picked before 20th October. The good autumn weather of 2008 came to an abrupt end in early November whereafter it rained almost every day for the rest of the month dashing hopes of some very good sweet wines. Vincent showed us what they had picked in mid-November. Even though these grapes had a potential alcohol of 17% the result was dilute not fully clean. Fascinating to taste the two different cuvées. Needless to say the second won’t be appearing under the Ogereau name but will be sold off in bulk. 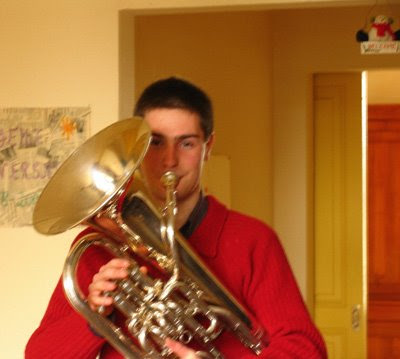 2003 Bonnes Blanches Coteaux du Layon Saint-Lambert-du-Lattay 2005 Bonnes Blanches Coteaux du Layon Saint-Lambert-du-Lattay
A marvellous pair of rich sweet wines with the 2003 very rich and concentrated but with good freshness in the finish. “It’s beginning to eat some of its sugar,” observed Vincent. At the moment the 2005, with its honey and citric purity and balance, has it over the 2003 but in the long haul, I wonder.

We finished with the 2007 Bonnes Blanches Coteaux du Layon Saint-Lambert-du-Lattay with its exotic fruit, especially passion fruit. It’s good but decidedly overshadowed by the 2003 and 2005.

Following a very enjoyable lunch – simply but well cooked (Catherine always promises us a simple meal with no starter but cheese and dessert always follows the main course) it was off to the Lebretons at Domaine des Rochelles in Saint-Jean-de-Mauvrets close to the Loire and north of Brissac-Quincé.
Posted by Jim's Loire at 22:29