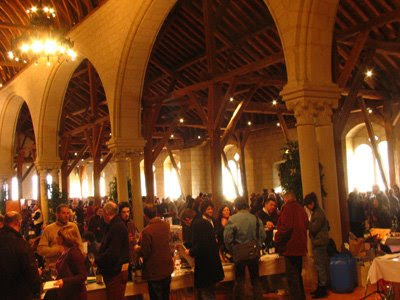 Renaissance tasting: early afternoon when less crowded
Off quite early this morning – crisp blue sky, sunny but cold – to the Renaissance tasting in the Greniers Saint-Jean in the western part of Angers on the other side of the River Maine. Walking across the bridge over the Maine the damage from the recent fire to part of the Château d'Angers was all too apparent. I stupidly thought I would take a photo on the way back as I was keen to get to the tasting as early as possible. Unfortunately I miscalculated as the sun was right in the way on my return, so no pic.

The Renaissance tasting is becoming increasingly popular and rapidly develops into a bun-fight – une guerre des brioches in French perhaps? Today was no exception: at 10am it was fine but by 10.45 it was impossible to get in to taste with some of the most popular producers.

I guess I spent about four hours there and managed to taste around 70% of the Loire wines in the tasting – the Renaissance event includes producers from all over France but obviously the Angers event attracts a sizeable Loire contingent.

I tasted too many wines in not ideal conditions to post detailed notes. Rather I'm going to pick out a selection that particularly grabbed my attention and list them. It should be remembered that quite a number of them are unfinished wines, which are likely to change considerably by the time they are bottled.

Some wines that stood out:

2007 Les Corbeaux d'Ardenay, Anjou Rouge, Patrick Baudouin
I was critical of Patrick's reds back in the mid to late 1990s – tannic and clumsy. This 2007, full of concentrated black fruits with a considerable structure, has taken two years to ferment but shows that I badly need to retaste Patrick's very considerably improved reds.
Also 2006 L'Effusion, Anjou Blanc.


2009 Top prize for oddities awarded to 2006 Les Ortinières, Jean-François Chene (Beaulieu-sur-Layon). Long time (18 months I think he said) in barrel without topping up gives this wine an awful, stale sherry nose – slightly better on the palate. Why go to the bother of making something so unattractive? The estate is called La Coulée d'Ambrosia, so Jean-François clearly has a well-developed sense of humour.

•••
List to be continued tomorrow (now complete) but just time to mention an excellent dinner this evening@Le Petit Comptoir, 40, Rue David d'Angers 49100 Angers 02.41.88.81.57. Four wonderful courses for 45€ – a special menu for the eve of the Salon des Vins. I think the normal menu is 30€. Great cooking and good value. Wines drunk: 2006 Les Clos des Rouliers, Anjou Blanc, Richard Leroy – initially quite fat but minerality developed in glass giving the wine a fine balance. Richard is definitely a star. Followed by the 2005 Saumur-Champigny, Bruno Dubois – for anyone who thinks that all Loire reds are light and fruit this concentrated little number from Bruno should make them think again.
Posted by Jim's Loire at 18:39