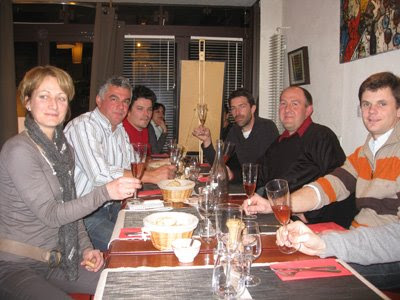 Carine, Wilfred, Jérome, François-Xavier, Philippe and Gérald with a mise en bouche le P'tite compet', a pet-nat from Grégory Leclerc, Domaine Chahut et Prodiges, Chargé
Really fun evening in the company of six Cabernet Franc Ambassadors from the selection made in Paris last April, when the 2007 and 2006 vintages were tasted. We tasted and dined at O 'Bistro close to Les Halles in Tours. O'Bistro only has a few tables, so booking is advisable. Organised by Pierre Pichot of Interloire, the following kindly brought over their wines for me to try or, strictly speaking, retry as I was on the panel in Paris that selected the Ambassadors: Carine Reze (Mabileau-Reze – Vignoble de la Jarnoterie, Saint-Nicolas-de-Bourgueil), Gérald Vallée (Domaine de la Cotelleraie, Saint-Nicolas-de-Bourgueil), Wilfred Rousse (Chinon), Philip Boucard (Lamé Delisle Boucard, Bourgueil), François-Xavier Barc (Domaine Charles Joguet) and Jérome Billard (Domaine de la Noblaie, Chinon). 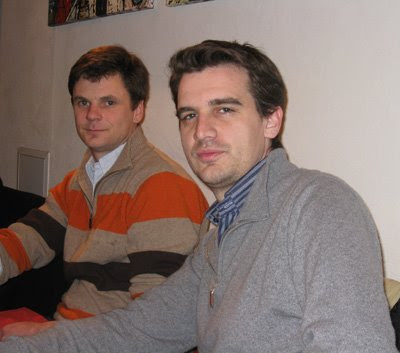 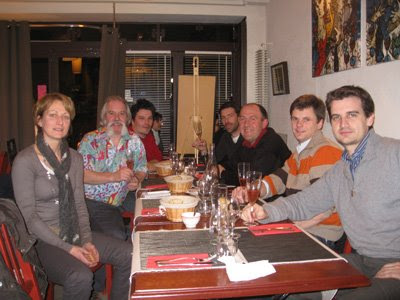 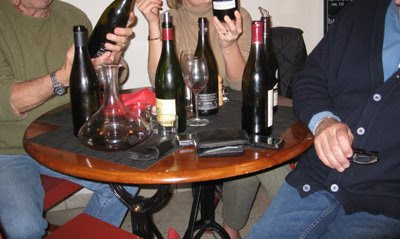 The spirit of moderation soon spread to a neighbouring table in the tiny restaurant as the Ambassador wines were sampled.

Wines tasted
2008 Cuvée Les Galuches, Wilfred Rousse, Chinon
A brut sample of Wilfred's easy drinking cuvée printemps, which will be bottled in April. Coming from vines on the sand and gravel soils of Saigny-en-Véron, this has only five days of cuvaison so the accent is very much on the fruit.

2006 Vignoble de la Jarnotierie, Mabileau-Réze, Saint-Nicolas-de-Bourgueil
From vines on clay-limestone at the base of the coteaux. Combination of sweet, ripe fruit and quite tannic structure needing a little more time.

2006 Cuvée Prestige, Lame-Delisle-Boucard, Bourgueil
A real contrast to the Chinon from Jérome's Chinon, this has a rather more rustic feel but with rich fruit, complexity and good length. A wine that should age well. Fascinating to have the two very different wines together – both good but gloriously different.

2006 Cuvée Terroir, Chinon, Charles Joguet,
Modern soft style packed with violets for the entry cuvée to the Joguet range. From vines planted at Beaumont on sand and clay.

2006 Le Vau Jaumier, Gérald Vallée, Domaine de la Cotelleraie, Saint-Nicolas-de-Bourgueil
This was one of the stars of last April's tasting and it still shining brightly. From vines planted in 1991 it had five weeks of maceration and was then aged in Burgundian barrels that had had one sole use – just six months. A modern style – rich and concentrated with notes of coffee and considerable length.

2006 Les Varennes du Grand Clos Francs Pieds, Charles Joguet, Chinon
This comes from ungrafted vines that Charles Joguet planted twenty years ago. Sadly they had to be pulled out in July 2008 as the phylloxera that first started to appear in 2003-2004 proved to be uncontainable. It has soft, rich fruit with a particulalry attractive, velvety texture. Further confirmation that François-Xavier has put the Charles Joguet domaine back amongst the leaders of the appellation after its slump following the retirement of Charles.

See also a report on the Lame-Delisle-Boucard blog.