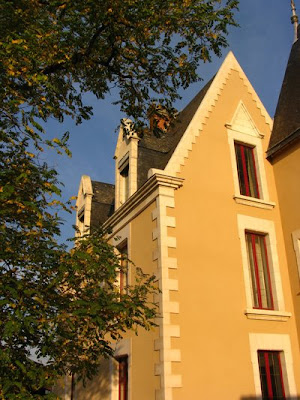 Château Pierre-Bise
Saturday 31st January 2009
Visiting and tasting with Claude Papin (Château Pierre-Bise) is always an enjoyable challenge. The wines are invariably excellent. It is fully comprehending the ideas and often the need to translate them into English that is the challenge, especially as I'm aware that Claude's understanding of English is increasingly good even if he doesn't speak in English very often.

Today Claude gave a fascinating explanation as to why cultivating (ploughing and harrowing) the soil regularly often as a way of avoiding using weed killer is a mistake. On a previous visit Claude had expressed reservations over cultivation as it disturbs the soil's natural profile. However, this was a much more full-throated condemnation – explanation that the practice was decidedly harmful.

To make his case Claude drew an exact analogy with a car. The fuel is the humus, the power or size of the cylinder is the depth of the soil and the amount of water that it can hold, while accelerator is the amount of air in the soil. The more air in the soil the faster the humus is burnt and the more nitrogen produced. The problem with frequent cultivation of the soil is that it puts more air into the soil and thus increases the nitrogen produced. This inbalance affects the vines' leaves and also makes it more susceptible to disease.

If this is correct, then it has significant implications given the increasing number of vignerons who cultivate their soils. 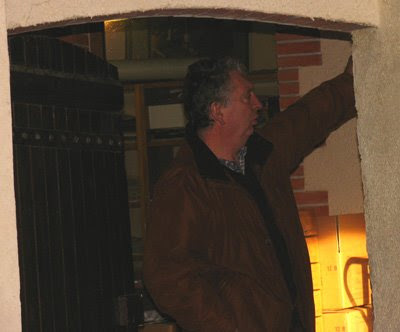 Claude Papin
Claude is predicting that within five years weed killers as we currently know them will have ceased to be used in the vineyards and that the bio-intelligent will have arrived. Instead there will be sprays based on plants that will keep grass and weeds under control, or there will be plants developed and used in the vineyards that are less vigorous and are less greedy with their use of water, or cultivation will be used. Obviously Claude hopes that at least one of the first two options will be available, so that cultivation can be avoided.

Claude also talked out the effects of global warming in Anjou, especially in relation to the increased level of transpiration. Between 1968 and 2008 the average min temperature has risen by 1˚ and the max by 2˚. At the same time the amount of sunlight has increased and transpiration has consequently risen by 30%. In 1978 around 600 mls of water was lost per annum through transpiration. As the average rainfall was 550-600 mls this was in balance. In 2008 the transpiration rate was 830 mls per annum – so out of balance with the result that some of the oak trees around the Layon are now dying. Apparently there is a new vine rootstock that has been developed whose transpiration rate is 30% less than existing rootstocks.

Among the raqnge of Claude's wines that we tasted, I particularly liked the following:

2007 Grand Beaupréau, Savennières
Honeyed with a mineral finish from the joint-venture with Vincent Ogereau and Yves Guignard

2007 Quarts de Chaume
Opulent fruit with wonderful lacy balance, showing how good some of the 2007 Loire sweet wines are.

2007 Spilite, Anjou Villages
Good concentration and texture for the year.