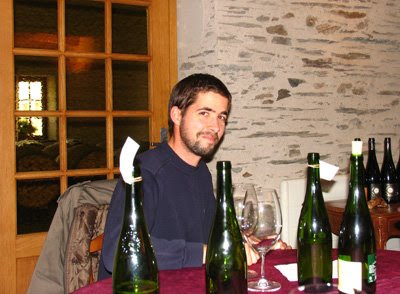 Jean-Hubert Lebreton
Following a very enjoyable lunch – simply but well cooked (Catherine Ogereau always promises us a simple meal with no starter but cheese and dessert always follows the main course) – it was off to the Lebretons at Domaine des Rochelles in Saint-Jean-de-Mauvrets close to the Loire and north of Brissac-Quincé.

Here Tom King (RSJ Wine Company) and I were looked after by Jean-Hubert Lebreton. Jean-Hubert used to be the assistant-wine maker at Hardy’s Banrock Station in Australia, where just one tank held more than the entire production of Domaine des Rochelles. On average the Lebreton’s press 700 tonnes of grapes – at Banrock Station it was 35,000. He also worked in Bordeaux at Pichon-Baron and Lynch-Bages.

As elsewhere the Lebretons had a small crop in 2008 – down overall by 15%-20% due to a combination of frost damage, poor flowering and small grapes with little juice. Normally they make 350-400 hls each of Cabernet Franc and Cabernet Sauvignon, making a total of around 800 hls of Anjou Villages. In 2008 they made only 180hls-200hls of each. Jean-Hubert mentioned that they are now selling 240 hls of VIn de pays Sauvignon in bag-in-box.

Both the 2008 and 2007 Anjou Blanc, which is vinified in 400 litre barrels, were attractive. The 2007 showing moiré honey, while the 2008 at this stage a more mineral character. The 2008 L’Ardoise Anjou Rouge (10% Cabernet Sauvignon and 90% Cabernet Franc) has a sooty nose and quite ripe, easy drinking fruit – as an Anjou Rouge should be. (Ardoise means slate – one of the rocks of Anjou.) 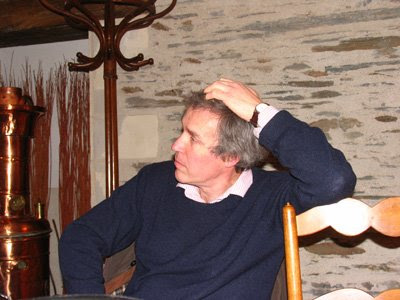 Tom King tuning into the French language
The 2006 Anjou-Villages (80% Cabernet Franc/ 20% Cabernet Sauvignon) initially has soft, floral black fruits with quite tarry tannins in the long finish. As you would expect the 2007 AV is less rich. It is also less tannic, so best to drink this while waiting for the 2006 to show its best. “It is difficult to get Cabernet Franc soft and supple – it needs time,” commented Jean-Hubert. “It is easier to sell La Croix de la Mission.”

Jean-Hubert: “2007 wasn’t easy. The Cabernet Sauvignon was picked some 10 days after the Franc – the yield was 45 hl/ha. With Cabernet Sauvignon it is possible to push the maturity further than with Cabernet Franc because Franc’s skin is not as tough and robust. The wine had three weeks maceration.

The 2008 La Croix is very deep coloured with sweet, richly concentrated fruit with good length. A this stage it is a bit cloying but is still has a long way to go before it will be bottled.

Onto the very rich and powerful 2005 Les Millerits, Anjou Villages, which comes in at 15% with blackcurrant and coffee notes. Still too young, this needs leaving in the cellar for at least another three or four years. Les Millerits is 100% Cabernet Sauvignon from a vineyard planted on friable, yellow schist. In contrast the 10 ha La Croix de la Mission is on quartz-red schist. It is aged for 18 months in barrels – partly new, partly one wine and partly two wines.

Jean-Hubert: “We didn’t make Les Millerits in either 2006 or 2007. The 2008 is not yet in barrel. It went through malo in tank but in future we’d like it to do its malo en barrique once we have enough cellar space available. While I was at Pichon-Baron we did some experiments on this and found that malo en barrique made the wines rounder and richer. ” 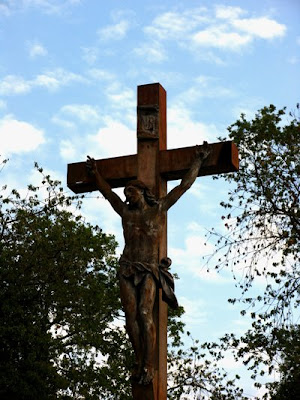 La Croix de la Mission close to the vineyard
The infant 2008 Les Millerits is like the 2005 – dark and brooding, with very rich, concentrated fruit and unlikely to be ready to drink before 2015.

Finally onto the sweet wines with the quite rich, nicely balanced and citric 2007 Coteaux de l’Aubance the first up. This is fermented and aged in 400 litre barrels. Not super sweet but one to enjoy as an aperitif or with blue cheese. The agreeably citric 2008 is lighter and without the same length as the 2007. It illustrates that 2008 is not a sweet wine vintage in the Loire. Providing you don’t pay very much for them, there are some perfectly pleasant wines to be enjoyed young and drunk as aperitifs or with rich pork and chicken dishes.

We finished by tasting the rich and concentrated 2007 L’Ambre, the Lebreton’s top L’Aubance with its fine peach and apricot flavours. Unsurprisingly L’Ambre was not made in 2008.

We talked about the rumours of some Anjou producers turning in 2008 to osmosis machines to try to make sweet wine without taking risks. Picking at 14%-15% potential and hoping the machine would work its magic. I guess this is an unfortunate illustration that despite the big renaissance of sweet wine in Anjou over the last 15 years that there are still producers who think that osmosis machines or chaptalisation for sweet wine are acceptable. They are not and we agreed that the sooner Anjou bans chaptalisation for sweet wine the better. Apparently the L'Aubance producers are considering banning chaptalisation – bravo I hope they soon take this long overdue step.