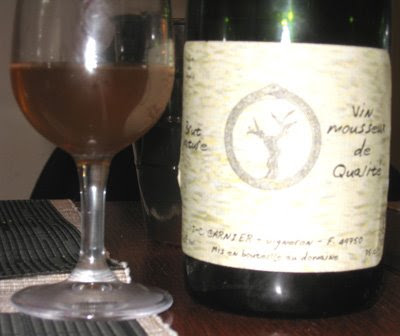 Jean-Christophe Garnier's 'vin mousseux de qualité'
To be fair the wine's colour was darkened by the flash and has been tweaked by Photoshop, although the actual colour was slightly lighter but the wine was just as muddy.
During dinner with the Cabernet Franc Ambassadors we tried a few other wines as O'Bistro has an interesting and eclectic list. The last 'wine' was the most memorable for all the wrong reasons. From Jean-Christophe Garnier, and apparently made from 100% Grolleau, this is a textbook example of the type of wine that gives 'natural wines' a bad name. Described as a vin mousseux de qualité (quality sparkling wine), it was light brown in colour and distinctly cloudy. Indeed far more reminiscent of rough farmyard scrumpy than a sparkling wine.

As it is virtually undrinkable I can only assume that this is a sophisticated joke by Monsieur Garnier of Saint-Lamber-du-Lattay – otherwise how could you put such a faulty and poor wine on the market? Equally I can only assume that this is the reason that it is probably stocked in 'cutting edge' wine bars. The alarming thing is that I'm pretty sure that this is not the worst wine that I have tasted from Jean-Christophe Garnier as he exhibits every year at the Renaissance des Appellations. I'm not against 'pushing the envelope', exploring the limits, but you have to be able to recognise when something is a miserable failure.

Several around the table questioned how this could be possibly described as 'mousseux de qualité', even 'vin' and Jean-Christophe calling himself a 'vigneron' raised eyebrows.

Before we were served the excerable mousseux we were served a couple of reds blind. The first was considerably lighter in colour than the Cabernet Francs we had been enjoying. I thought it was from the Loire and opted for a Pinot Noir from the Central Vineyards as did Gérard Vallée. Perhaps I should have been more courageous and plumped for a Sancerre, which, in fact, it was – 2006 Terre de Maimbray from Pascal and Nicolas Reverdy. The second was similar in colour but a little lighter in body. I surprised myself by guessing that it was a blend of Gamay and Pinot Noir. Actually it was 2007 Les Andilles, Cherveny from Hervé Villemade – 80% Pinot Noir 20% Gamay. Pleasant enough but not memorable – still it was 2007. Jérome felt that the finish was bitter.
Posted by Jim's Loire at 20:01