The legal challenge was brought by the Fédération Régionale des Vignerons Indépendants du Languedoc-Roussillon, Le Syndicat des Vignerons de l’Hérault et L’Association La Cause du Vin, who felt you couldn’t have a vin de pays that covered most of the whole country. Also the vin de pays producers of the south of France believed that Vignobles de France would compete with their wines. The EU had had similar doubts about the legality of a countrywide vin de pays and refused to publish details of the Vignobles de France.

In its short life 70,000 hl of Vignobles de France were produced.

This is yet another example of an attempt to reform the French wine industry that has got nowhere. Over the past 20 years various reports have been produced, proposals made and so far nothing. The predecessor to Vignobles de France was Cépages de France and was another attempt to facilitate the sort of cross-regional blending that has always been possible in Australia and which might assist France in building large volume brands to compete in the world market. This proposal was also killed off by opposition from producers in the Midi.

The reclassification of the Bordeaux’s Cru Bourgeois and the Grand Cru Saint-Emilion were also knocked out by legal challenges. 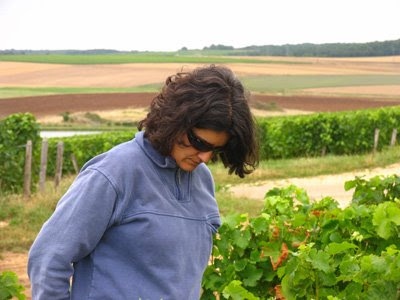 Sarah on the case in Sancerre during the 'summer' of 2008
Sarah Ahmed, the wine detective and recent winner of the Annual Portuguese Wine Awards Wine Writer of the Year 2009, has just published her notes on wines tasted both at the Salon des Vins de Loire 2009 but also her trip to the Loire last August.