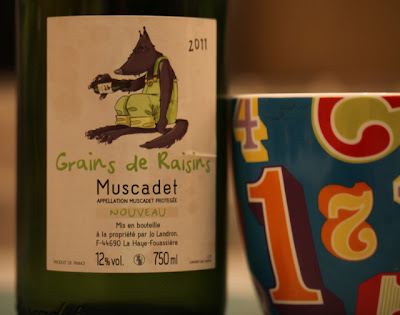 2011 Grains de Raisins Muscadet Nouveau from Jo Landron
This afternoon I took collection of this sample of 2011 Muscadet Nouveau from Jo Landron kindly sent to me by Les Caves de Pyrène. Whacked it straight into the fridge and a couple of hours later pulled the cork – short plastic Normacorc. Certainly better than using a 'real' cork but really wines like Muscadet Nouveau along with Beaujolais Nouveau really ought to be closed with a screwcap. I guess it is just too expensive and not practical to do a short screwcap bottling run in the Loire. Mind you I think all Muscadet, even the new crus communals, ought to be closed with a screwcap.
Enough of this, so what about the wine from 2011, which was a difficult vintage in Muscadet due to the rot provoked by the summer rain. When I saw Jo at the Biodyvin tasting in London on 10th November he told me that the pickers had gone through the vines twice during the vintage and thrown between 20%-30% of the fruit on the ground due to the rot.
Jo Landron's 2011 Grains de Raisins is lightly floral, refreshingly lemony with some weight of fruit and a lemony but quite short finish. I tried Les Grains on its own and then with a tapa of cold prawns with a little lemon and black pepper. It certainly works better with a snack: I'm sure it would be fun sharing a bottle or so with some friends over some oysters or other fruits de mer.

Muscadet Nouveau cannot be labelled a sur lie because inevitably even in an early vintage like 2011 (Jo started on 9th September) the wine doesn't spend enough time on its lees. The rules state that a sur lie cannot be bottled until 1st March following the vintage.

Jo's Grains de Raisins will retail for around £8, while in the London wine bars of Terroir and the very new Soif (Battersea Rise) it will be I'm told by a man who knows in the region of £18.
Yesterday my fellow blogger Hervé Lalau made the case on his Chroniques Vineuses for Beaujolais Nouveau. Why not have a party to celebrate the arrival of the latest vintage in the darkening days of November? Why not indeed! However, it has to be admitted that the arrival of the first wines from the latest vintage has far more resonance in France for the simple reason that people in the UK have been buying 2011s from the southern hemisphere for months. Perhaps our loss that we can no longer celebrate the arrival of les vins nouveaux with quite the same enthusiasm as we could 20 years ago. 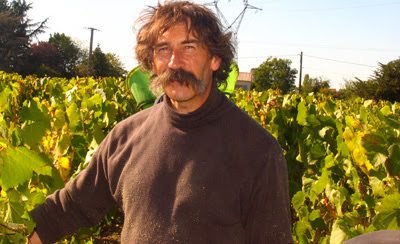 Jo Landron with his all-year moustache – it's not just for movember!
Posted by Jim's Loire at 19:27

Quote..."Yesterday my fellow blogger Hervé Lalau made the case on his Chroniques Vineuses for Beaujolais Nouveau".

Hi Bob. The Brouilly must be the better deal.

We've just shipped (and sold out of!)my Beaujolais-Villages Nouveau from Château de Grandmont. Screw-cap and £7.25 per bottle! 35hl/ha yields, no thermo-vinif and minimal dose of SO2. I guess what Bojo Nouveau used to be in the 1930's (bar the screw-cap)!

Thanks Christopher. What no bananas?!

Not today, Jim-lad! They didn't appear until the 1970's with our old friend 71B! We prefer the madness that is wild yeasts, whether they are in the vineyard or the winery.