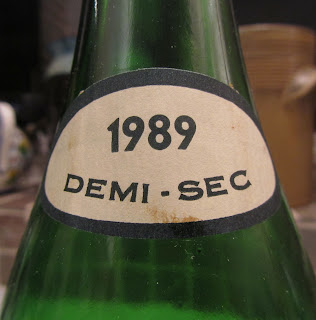 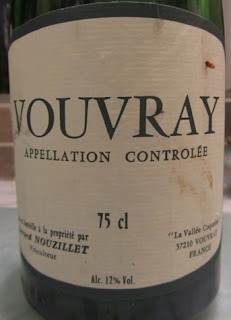 The title of this post needs to be clarified – the producer is unknown to me. I'm also trying to remember exactly how we acquired it. I think someone kindly brought it round to a dinner we had in the Loire in October and we brought it back to London via Brescia and the European Wine Bloggers' Conference.
Gérard Nouzillet is certainly a producer I have never come across, although I have doubtless driven past his property on a number of occasions as he is based in La Vallée Coquette. This valley is on the west side of Vouvray and runs north-south towards the Loire. Vouvray's cooperative is based here.
We chose to drink the 1989 demi-sec on Sunday as I was pot-roasting a chicken with an apple and cream sauce (poulet à la Normande) as the base. The dish is finished off with a decent dose of Calvados and more crème fraîche. Although both of us rather fancied red, we knew perfectly well that the dish would be too rich and sweet for a red, so demi-sec Vouvray it was.
Nouzillet's 1989 was a deepish gold – certainly a deeper colour than many Vouvrays from that year, which have tended to remain quite a light gold, while the 1990s in contrast have often ceased to be light golden and instead are a mid-gold, burnished gold. A little musty on the nose – not corked – and with some oxidation, hence the colour, it had some good honeyed weight and a clean finish. Not a top Vouvray but it worked well with the dish. The little that was left over went into the fridge and we drank it as a small apéro the next day but it had certainly faded considerably.
Posted by Jim's Loire at 18:28

Jim
How common is it for small scale producers in Vouvray to only bottle in very good years? In other average to poor years sending all their fruit to the cooperative and only bothering to go it alone in good years. Or does the cooperative give growers some bottles to label personally? I was given a bottle of 1997 Vouvray made by Primault of whom I've never been able to find any mention, either in books or on the net.
Regarding the colour, my bottles of 1989 Huet le haut lieu demi sec could never be described as pale.

James. Small producers only bottling in good years? I would have thought this was rare but I really don't know. If you are a member of a cooperative there would be a contract stating what should go to the cooperative each year. Some cooperatives demand that the totality of your grapes goes to them as a requirement of membership, others allow a proportion.

I have tasted 1989s on a number of occasions from Huet and certainly they have been considerably lighter in colour than the 1990s. I have changed pale for light gold which was perhaps misleading.

If you search on Pages Blanches you will find that there are two Primaults in Vouvray Philippe and Serge I don't know if either make wine and like you can't find any mention on Google that they are producers.

How nice that the bottle label gives some idea of what to expect when opened: demi-sec, rather than sec or moelleux. Would that all Vouvray labels were that informative today.

Frank. I think there have always been some producers who indicate the level of sweetness while others do not.

Gerard Nouzillet is well known to me, having visited his cave most years between 1995 and the early 2000s. He died some years ago and his cave and land adjacent have been sold off and developed as housing. He was a small producer based in the Vallee Coquette, between Laissement and Audbert (both still producing). As you assume in your response to James he produced his own wines every year but his children were not interested in continuing the business and, as he got older, he rented out his vineyard to another producer -I don't know which one, and concentrated on selling his cellar of 60,000 bottles. He sold mainly to the French restaurant trade but did sell from the "cave gate". He also kept certain vintages for himself-as he said to drink in his retirement. He died some few years ago now (between 2003 and 2008?) and his family sold off the cave and land. Sad as his wine was a very good example of Vallee Coquette Vouvray-I've just finished the last bottle of his wine from my "cellar"-a 1979 sec and it was as good as the day we bought it.

I've just typed a long response with a recent history of Gerard Nouzillet 1995-date), but the system has lost it as the robot proof is illegible. Pity but I'm not going to type it all again-suffice to say he is dead and his family sold off the cave and land (not sure what happened to the vineyard)-I've just drunk my last bottle (1979 sec) ad very good too!

Andy. Many thanks for your two comments. Jim

Gérard Nouzillet was my grandfather, I'm glad to see that even in foreign countries people still recall him.
Indeed, he died in June 2008, even if he had already retired several years before. I wonder how you got this bottle, since he stopped selling them way before your article, maybe a lucky day?
As said Andy, sadly none of his 3 daughters were interested in making wine and the house and cave were too expensive to keep, and I really regret this legacy loss, since it was a place I loved as a child. He digged all the cave himself, and there was several rooms dedicated to every grandchild he had. It's heartbreaking for me to imagine that this no longer exists.
Anyway, it was nice to hear about him.
(Sorry if my english is bad)

Hazelkyn. Many thanks for your comment. Much appreciated. As I said I can't remember how we came to have this bottle. It was certainly given to us and I'm pretty sure we had it for a number of years before we opened it.

Is his cave still used for wine please?

You're welcome!
Now I think the cave is divided in several little rooms that are rented to people to store their wine, at least it was the project when the cave was sold.