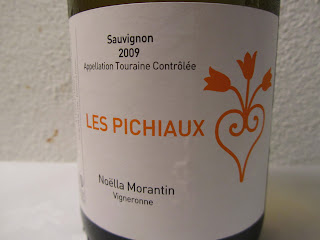 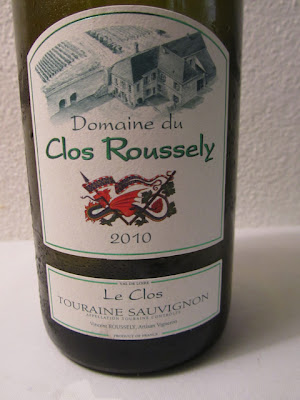 2010 Le Clos, Touraine Sauvignon, Domaine du Clos Roussely
The aperitif was Vincent Roussely’s 2010 ‘le Clos’ Sauvignon Blanc (£8.75). This is a modern Touraine Sauvignon with attractive grapefruit and other citric flavours, some palate weight and the quite marked acidity in the finish, which is characteristic of the 2010 vintage. Vincent’s wines continue to be consistently good and offer very fair value.
Noëlla’s 2009 Sauvignon caused the assembled tasters to lose their bearings with little or none of the stereotypical characteristics of Sauvignon Blanc. Instead ‘Les Pichaux’ has some oxidative and leesy characters from its long fermentation and maturation.  For me Noëlla’s wines fall well within the acceptable side of my continuum of drinkability. However, the vast majority present weren’t convinced.
I kept some of Les Pichaux for a good hour and it certainly changed in the glass with the oxidative character lessening. Instead developing an aroma of bread pudding. I fancy that this may well need to be decanted. Clearly some experimentation is required. 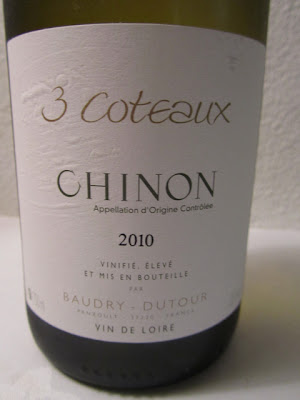 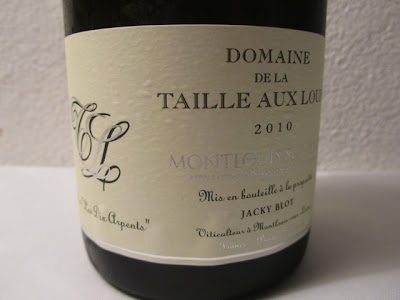 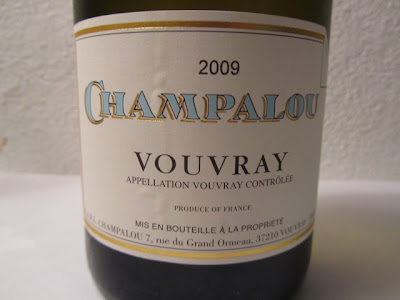 The 2009 Vouvray Sec from Domaine Champalou (£11.95) was the richest of the whites tasted showing the fuller character of the 2009 vintage and also doubtless having a little more residual sugar than the other whites. It attracted some followers, although Les Dix Arpents was judged to be the complex wine. 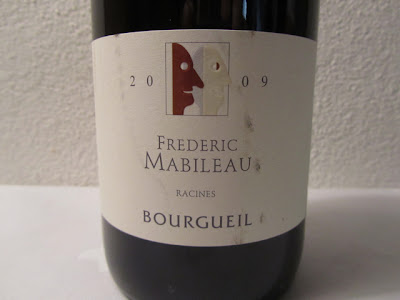 2009 Racines, Bourgueil, Frédéric Mabileau
Frédéric Mabileau’s 2009 Racines Bourgueil (£13.75) comes from a one hectare plot on clay and gravel at Chouzé-sur-Loire, a commune by the Loire and to the south of Saint-Nicolas-de-Bourgueil. Frédéric’s grandfather planted the vines here over 45 years ago. It has attractive spicy, youthful fruit with some opulence. Best drunk I think over the next three or four years rather than for long aging, where Frédéric’s L’Eclipse Saint-Nicolas-de-Bourgueil from the limestone coteaux is a much better bet if looking for a wine to lay down. 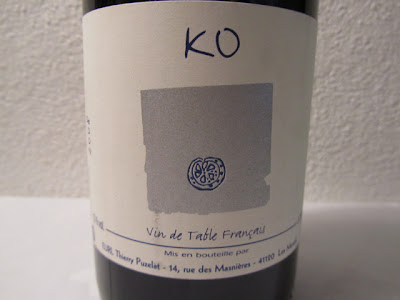 2008 KO, Thierry Puzelat
Thierry Puzelat’s 2008 KO Vin de table Français (£13.75) proved to be popular with its sous bois and farmyard character. I suspect that a number of Australian winemakers, looking for squeaky clean wines would dismiss this as technically faulty. However, I think it works and is drinking well now. The wines sold under the Thierry Puzelat name are négociant wines made from grapes bought from producers who have a similar approach to organic viticulture as Thierry. The Domaine du Tué-Bouef is the family estate in Les Montils, where Thierry and his elder brother, Jean-Marie, work together. 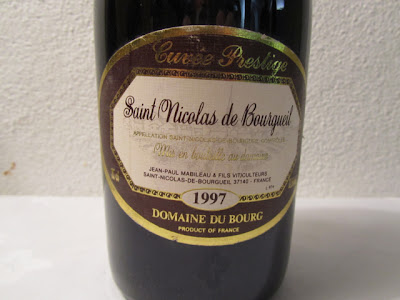 1997 Cuvée Prestige, Domaine du Bourg, Jean-Paul Mabileau
The 1997 Cuvée Prestige, Saint-Nicolas-de-Bourgueil from Domaine du Bourg, Jean-Paul Mabileau, Frédéric’s father, had aged well with its sweet evolved fruit – an elegant, complex and delicate wine. Often when tasting Jean-Paul’s wines when they were young, particularly when tasted alongside Frédéric’s they seemed rather thin and weak. But they have a deceptive power with the ability to take on more weight with a few years in bottle and to age well. This 1997 is showing well now and, although I don’t think it will get better, it will still last a few more years. 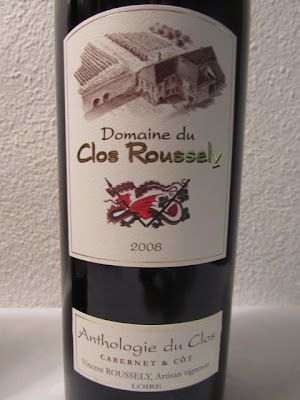 2008 Anthologie du Clos, Vincent Roussely
We finished with the 2008 Anthologie du Clos from Vincent Roussely (£9.95), which is a blend of Cabernet Franc and Côt. Like several 2008s it is quite edgy at the moment needing more time for the acidity and tannins to soften down. It also needs food and showed well with the tasty game casserole served as main course.
Posted by Jim's Loire at 18:04

Bob Cartainly some good wines here. Not sure any were great wines.