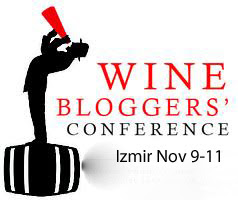 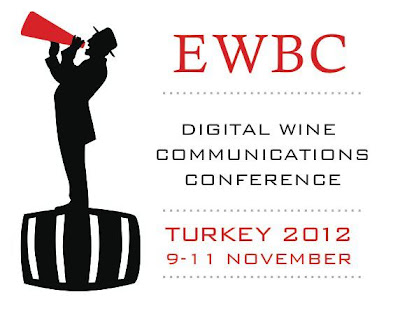 
The fifth annual EWBC digital wine communications conference will be held in Izmir, Turkey, on November 9 - 11, 2012.


The only international event dedicated to the convergence of wine and the web, the EWBC provides a platform for the global wine community to address today's online communications opportunities. The annual, three-day event is helping to build an international network of wine communicators, and also encourages the acquisition of skills and information and the exchange of expertise across national, language and professional boundaries.

Organized by Ryan and Gabriella Opaz and Robert McIntosh of social media company Vrazon, the 2012 EWBC will be sponsored by Wines of Turkey.

"Having attended the 2011 EWBC, we're excited to invite wine professionals from around the world to explore Turkish wines, food and culture, and to help us communicate the ongoing journey to rediscover the source of Turkish wine history," said the Director of Wines of Turkey, Taner Ogutoglu.

2012 sees the EWBC celebrating its fifth anniversary (successful events have been run in Spain, Portugal, Austria and Italy) and the organizers expect a significantly larger turn-out, based on the exciting growth in attendance figures since the event was created in 2008.

The conference will be held in the ancient city of Izmir, known as the Pearl of the Aegean. Izmir's extraordinary history spans over 3,500 years and is marked by numerous archaeological sites relating to Greek, Roman and Byzantine civilisations and is within easy travel distance from some of Turkey's emerging wine regions.

The theme of the 2012 conference is 'Source', reflecting in part the recent hypothesis by Dr. Patrick E. McGovern* that Turkey is the birthplace of vitis vinifera, but also the suggestion that wine communicators aim to become sources of knowledge, not just disseminators of information.

“With the vast amount of information being added the web every second, it is hard for consumers to sift through content of varying levels of quality to find what they seek,” says EWBC co-founder Gabriella Opaz. “During the 2012 EWBC, we intend to help wine communicators learn how to position themselves as a source of quality information, whether that be on a single style, region, subject, event or study.”

EWBC 2012 delegates will not only attend a wide range of educational tasting on Turkish wines and visit several wineries within easy reach of the conference venue, but they will also be able to taste a wide range of wines from other countries via sponsored tastings held during the event. The event will provide ample opportunity for participants to experience the food, wine and culture of Turkey while discussing issues relating to the convergence of wine and the web.

The fourth annual EWBC was held in Brescia (Italy) from October 14-16, 2011 and was attended by 216 wine communicators from 34 countries.

A recording of the announcement of the 2012 venue can watched here. It is rather slow to get started.


For more information about the event, and to register, please come to our NEW European Wine Bloggers Conference site:http://ewbc12.vrazon.com/ Alumni (anyone who has attended any of the previous EWBC conferences) will get a 40% discount on the conference ticket price of 300€.