A trio of recent reds – a Côt, a Pinot Noir and a Cabernet Franc 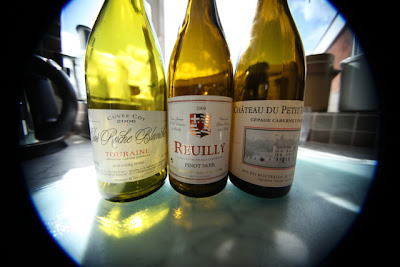 Some notes on three recently drunk reds – made from the three different varieties. Let's start first with the 2008 Reuilly, which is 100% Pinot Noir and is made by always reliable Denis Jamain (Domaine de Reuilly). Described very succinctly as 'delicious' by CRM, this easy drinking, vibrantly red fruited Pinot that worked very well with veal kidneys finished in a cream and mushroom sauce. This is Denis straight Reuilly red cuvée designed to be drunk fairly young with an accent on the fruit. He has two other cuvées – Les Chênes and La Comtesse – that benefit from longer aging and are more complex wines.
Denis' fine Pinots are another reminder that the Loire's Central Vineyards can and does produce Pinot Noirs that are well worth discovering if you are not already into this secret.

Next up the 2005 Reserve Cabernet Franc from Château du Petit Thouars offering remarkable value at 6€ from the château. It has the concentration, richness and power expected from a 2005. I decided to try this 2005 to see how it is developing. I concluded that it ideally needs another couple of years or so to show its best, so a bit a patience is needed. In the meantime drink the deliciously soft, black fruited 2009 Sélection (5€) from Thouars.

Then the 2006 Côt from the Clos Roche Blanche. I can't remember trying their 2006 Côt recently. It certainly has richness – spicy black fruits – but it is less precise and lacks a little of the zip in the finish that these Roche Blanche Côts normally have. It is still an attractive drink but I fancy it reflects the difficult conditions of the 2006 vintage when galloping rot forced vignerons to pick as rapidly as possible. I would certainly make sure it is served cool to preserve freshness.
Posted by Jim's Loire at 21:46