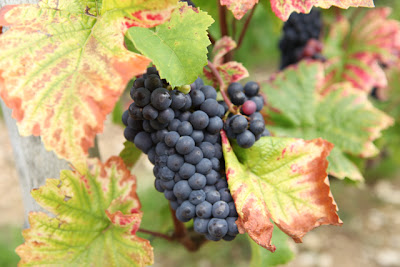 Real Pinot Noir in Sancerre late August 2011
For those of you waiting impatiently for the appeal court judgment, which was due today, on those convicted in the fake Pinot Noir scandal the announcement of the judgment has been delayed due to a lack of staff. The judgment will now be announced on 12th October.

There are a number of posts on Jim's Loire about the Fake Pinot case – here, here and here.


Shortage of staff
This seems to be a frequent complaint in France at the moment. La Nouvelle République recently ran a story on the difficulty of recruiting locals to pick grapes. As a result producers are increasingly hiring workers from Eastern Europe and in this particular instance from Bulgaria.
It is the same in the restaurant trade, perhaps particularly in rural areas. Marc Hammani (chef/proprietor at Auberge de Montpoupon) and Xavier Fortin (sommelier at La Promenade, Le Petit Pressigny) have both complained about the difficulty of recruiting waiting and kitchen staff holding back their businesses.
Posted by Jim's Loire at 15:59