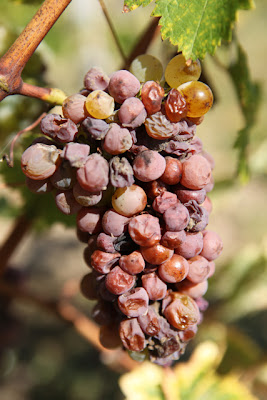 ﻿Bunch in the Quarts de Chaume today
The INAO today accepted unanimously that the Quarts de Chaume should be a Grand Cru and Chaume a Premier Cru Coteaux du Layon. The décret has yet to be signed by the relevant French government minister. It can take some time before the Minister finds the appropriate pen but this is normally a formality. Quarts de Chaume is the first Loire appellation to be made Grand Cru.
On the two previous occasions when a distinction for Chaume has been agreed; there has been a successful legal challenge from Domaine des Baumards. It is not yet known whether this will also attract a legal challenge.
It looks like 2011 will be a magnificent year in Chaume and Quarts de Chaume. Some of the grapes are now extraordinarily rich - a mix of passerilage and noble rot - reports of 26% potential already. Such are the levels of potential alcohol that some vignerons are instructing their pickers not to be too selective in their picking and to include golden grapes that might normally be left to mature and be picked at the next tri, so as to reduce the wine`s potential sweetness and to give greater freshness.
Posted by Jim's Loire at 21:06