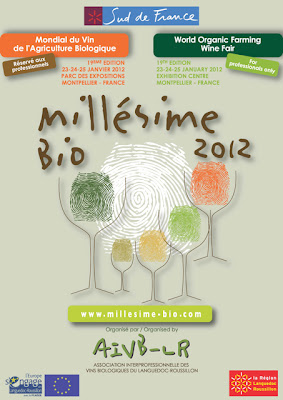 I've only been to Millésime Bio once – the year it was in Narbonne. I certainly found it a good fair. Everyone is equal – there are no fancy stands each exhibitor has the same sized table.
Unfortunately the timing of the Salon des Vins de Loire has tended to make it difficult to go again. However, this year with the Salon being a week later I'm hoping I will be able to get to the 2012 edition.
Press release on the 19th Millésime Bio 2012:
'International organic wine show
23-25 January 2012 At the Parc des Expositions, Montpellier
Started in 1993 by a handful of Languedoc-Roussillon winegrowers, Millésime Bio, an event with no equivalent in France or worldwide, has over the years become an unmissable event in the international organic-wine sector. For this 19th edition, 600 exhibitors from every wine-producing country and region, and about 3,200 visitors, are expected – a success that confirms the growing popularity of organic wines worldwide.
Millésime Bio: a unique concept
In one place, an offering of wines made using organic-farming methods in all countries and regions of production. A forum for exchanging ideas, with conferences and self-service tasting areas.
New for 2012
Restricted to organic-certified wines only (no products from vineyards under conversion).
The 2011 show in brief
560 exhibitors (producers and vintners), +14% year-on-year, and 15 countries represented: the top trio are France, Italy and Spain. The New World strengthened its presence, with several makers from California, Chile and Argentina.
3,200 trade visitors (vs. 2,700 in 2010), 21.5% of them from outside France. Visitors from Germany, Scandinavia and Belgium were still the most numerous (12.6 %, 12.6% and 11%). There was also a strong attendance from North America (11%) and Asia* (11.3%). *China, South Korea, Japan, Taiwan.
A few facts & figures on the French organic-wine market
Production
With 50,268ha under organic production in France in 2010, compared to 39,000ha in 2009, organic vineyards expanded by 28%.
The number of organic wine producers increased from 3,024 in 2009 to 3,945 in 2010, a rise of 30%. Leading the way are three French regions: Languedoc-Roussillon (16,462ha, +30% year-on-year), then Provence-Côte d’Azur (11,209ha, +25%) and Aquitaine (7,715ha, +41%). France is also a strong performer worldwide, occupying third place behind Spain and Italy.
Consumption
From 2009 to 2010, total year-on-year market growth of organic products generally was an estimated 10%, and sales in hyper- and supermarkets increased by 20%. In 2010, 43% of French people said they consumed some type of organic product at least once a month; 23%, at least once a week; and 7%, daily. In 2010, organic-wine sales rose to €322m (+8% year-on-year).
More details: http://www.millesime-bio.com/v2/millesime_bio.asp
Posted by Jim's Loire at 09:22