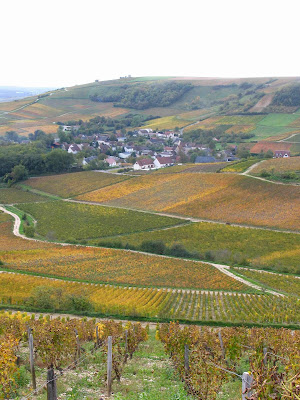 Lire la suite
On Saturday morning a vigneron based in Bué discovered that his recently planted parcel apparently at La Cabarette, Saint-Satur had been vandalised with 5600 vines uprooted – an estimated damage of 12,000€. The vigneron is said by Decanter to be Jean-Jacques Auchere.

The shameful vandalism has been widely attributed to the tensions and controversy over the right to plant Sauvignon Blanc and Pinot Noir close to appellations. These tensions are particularly strong in Sancerre.

Frankly I'm not surprised that négotiations haven't produced the result that the Sancerre producers want. I can see no good reason why it shouldn't be possible to plant both Pinot Noir and Sauvignon Blanc for IGP wines in Centre Loire. Instead their objections are foolishly protectionist and send out very negative signals regarding how fragile they see Sancerre's reputation.

One of the reasons advanced for a ban on planting Sauvignon Blanc and Pinot Noir destined for IGP in the Centre Loire is that it would be easy to blend IGP with appellation wine in a winery where both types of wine are made. This ignores that some of the leading respected producer négociant companies, such as Henri Bourgeois and Joseph Mellot, already make both AC and IGP wines in the same winery. The Henri Bourgeois Le Petit Bourgeois and Joseph Mellot Destinea are both IGP ranges, featuring both Sauvignon Blanc and Pinot Noir, made in their facilities in Sancerre.
At their winery in Chavignol I have frequently tasted Petit Bourgeois, Sancerre, and Pouilly-Fumé from stainless vats all in the same area. Are the protesters really suggesting that Henri Bourgeois and Joseph Mellot blend their IGP wines into their Sancerre or that they are even tempted to do so?!
Jean-Christophe Bourgeois sources Petit Bourgeois from around Touraine. What would be the difference if it was sourced from IGP vines close to Sancerre? Why the objection?

If it were possible to sell IGP Sancerre, then I could understand the complaints but any IGP wines made from vines planted close to Sancerre etc. have to be labelled IGP Val de Loire.

A number of Central Vineyard appellations, such as Menetou-Salon, Reuilly and Sancerre who make pure 100% Pinot Noir, already enjoy protection provided by the INAO, who will not allow pure Pinot Noir in appellations like Coteaux du Giennois, Châteaumeillant, Saint-Pourçain and the Côtes d'Auvergne. Pinots from these appellations have to include Gamay.

Hopefully whoever vandalised these vines will be told to stop as this sort of vicious action is very damaging to Sancerre's reputation.