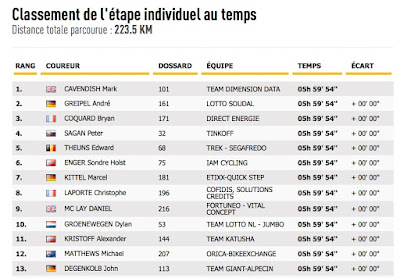 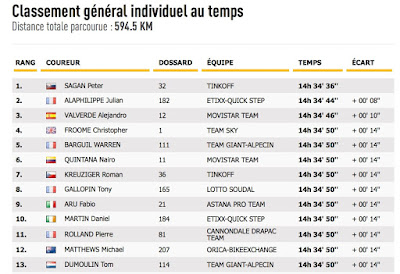 Mark Cavendish beat André Griepel by the narrowest of margins on Angers' Boulevard Foch. It was down to a photo-finish to decide the result. As I predicted yesterday the uphill finish played its part with Griepel starting his effort a little too early very soon after he had turned the corner at the Mercure. Cav was expecting this and took Griepel's wheel. Mark and André finished comfortably ahead of Frenchman Bryan Coquard and Peter Sagan. Marcel Kittel didn't really feature in the sprint coming in 8th.

This latest victory takes Mark Cavendish's Tour de France stage wins to an amazing 28. He is now equal with the great Bernard Hinault and six behind Eddy Merckx. He has a very good claim to be the greatest sprinter ever, even though he has not won as many stages in the three Grand Tours – France, Italy, Spain – as Mario Cipollini and Alessandro Petacchi. The Tour de France is the most important and most hotly contested of the three Tours. Mario had 12 TDF stage wins and Alessandro six.

After his time at Etixx Quickstep, Mark Cavendish appears to be reinvigorated. Partly due to having some of his old team back together Bernie Eisel and Edvald Boasson Hagen along with Mark Renshaw, who came across with Mark from Etixx. Somehow things never really worked out at Etixx, whereas as now the old firm is being very effective, despite not being the largest or most powerful train in the race. Mark's track training for the Rio Olympics is another factor as is his delight in helping to raise money to provide bikes for African children through Qhubeka.

Stage 4: Saumur to Limoges – 237.5 kms
Today is the longest stage of this year's Tour. Will it be run as slowly as yesterday when the peloton appeared to be out for a gentle club run until they approached Angers. Today's stage has one category 4 climb towards the end of the stage but this should not be steep enough to drop the sprinters. It starts fairly flat but becomes more undulating as you approach Limoges. Apparently the uphill finish is a little steeper than yesterday. Likely winners – André Griepel, Peter Sagan and Mark Cavendish. 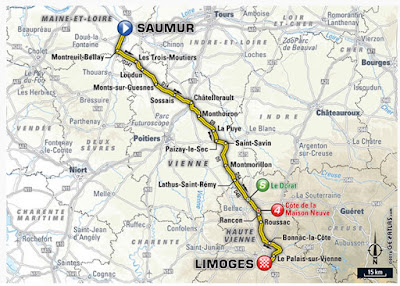