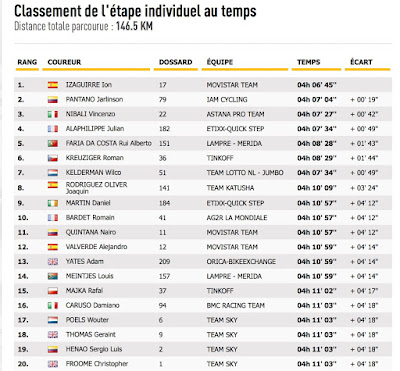 A brave ride by Ion Izaguirre in horribly wet conditions won him his first Tour de France stage win. The day's exciting racing came from the breakaway as the GC contenders rode conservatively in the very wet, slippery conditions keen to conserve their positions rather than taking any risks.

There was an exciting duel on the Col de Joux Plane involving Izaguirre, Jarlinson Pantano, Vincenzo Nibali and Julian Alaphilippe. When Izaguirre, Nibali and Pantano crested the summit together I thought Nibali would be the fastest on the descent but he was cautious, perhaps affected by his crash on the descent yesterday. Instead Izaguirre descended brilliantly and finished a comfortable 19 seconds ahead of Pantano with Nibali a distant third.

Earlier in the stage Romain Kreuziger, who had managed to get into the big breakaway group, became for a while the virtual second on the road. He was assisted by a long, herculean pull by his team mate Peter Sagan until Sagan inevitably blew up on the third mountain climb of the day. Nevertheless it was another impressive show of strength by Sagan. We will have to see whether he will pay for this in today's likely sprint finish in Paris. Kreuziger moved himself up to 10th pushing Mollema out of the top 10. 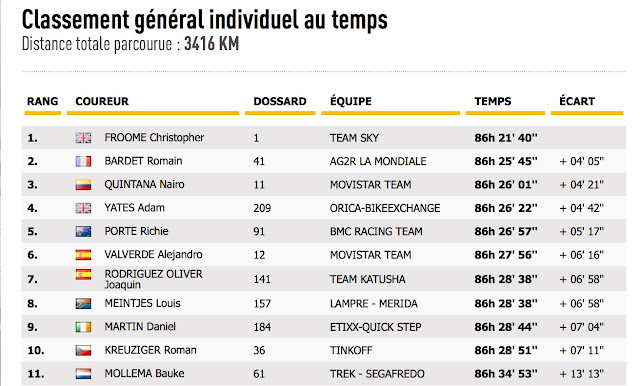 Chris Froome finished safely in Morzine after a careful descent shepherded by his team down the last dangerous slopes. He faced no serious attacks and providing he finishes today's short stage into Paris will have won his third Tour de France. He joins the select band of three time winners – Louison Bobet, Greg LeMond and Philippe Thys, while Jacques Anquetil, Bernard Hinault, Miguel Induráin and Eddy Merckx won the Tour five times.

Apart from Kreuziger moving into the top 10, the only other change saw Joaquin Rodriguez Oliver move into 7th place with a successful late attack on the Col de Joux Plane. He replaced Fabio Aru, who blew up horribly on the lower slopes of the Col, finishing 17'38 behind Izaguirre and more than 13 minutes Froome and the other GC riders. Ironically his Astana team had been setting a fierce pace to control Kreuziger and perhaps set up Aru for an attack. 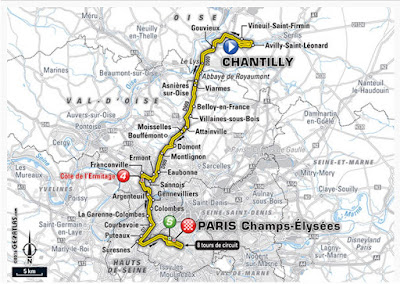 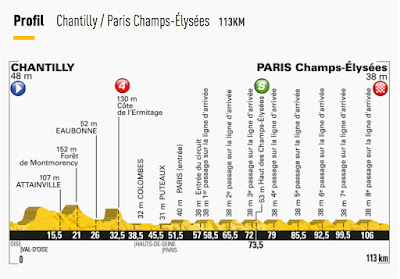 Much of this stage will be a celebratory procession until the centre of Paris is reached when the racing will start with eight circuits of the Champs-Élysées to finish in a likely bunch sprint. I am going for a win by Marcel Kittel with André Griepel second.
Posted by Jim's Loire at 10:21