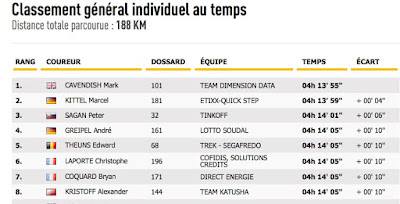 It was wonderful to be proved wrong! Just hours after playing down Mark's chances of stage victory and tipping Marcel Kittel to take the stage win, Mark proves what a great sprinter he is.

After the anguish of crashing out of the 2014 Tour in Harrogate in the sprint at the end of Stage 1 and last year's disappointments when Mark took just one stage eclipsed by André Griepel in the absence of Kittel, who had limited Cav to just two stage wins in the 2013. It was tempting to think that Mark's best days were past and that Eddy's record 34 stage wins was safe even beginning to wonder whether Bernard Hainault's 28 wins would be matched.

Today Mark was back to his best showing why he has such a strong claim to be the greatest sprinter ever. Moving to a new team – Dimension Data – after his rather unfulfilled stay at Omega-Pharma-Quick Step, now Etixx-Quick Step with Kittel as their star sprinter, has certainly hit the jackpot today.

It looks like Mark moving with Mark Renshaw to Dimension Data and reuniting with Bernie Eisel, who was an essential part of the very successful HTC Columbia/Highroad lead out team, has been a masterful move.

Mark is not just about speed – using his characteristic crouched style – but very importantly he has brilliant positioning and the ability to read a fast changing bunch sprint and react instantly.

Today's win show that. Well into the final kilometre Mark is ticked in behind Renshaw, he checks a couple of times to his right to see if anyone is coming up on the barriers. Then World Champion Peter Sagan flies past and looks to be about to win the stage. Mark accelerates rapidly to get on Sagan's wheel, then as the line approaches moves out, goes for the line and wins comfortably from Marcel Kittel, who had started his sprint well before Mark did. Sagan takes third and André Griepel fourth. The overhead shots show just how emphatic Mark's victory was: Kittel was more than a bike length behind. This is a huge margin in such a flat out sprint.

Almost as impressive as Mark's win was his interview immediately after his win – citing his team, the Qhubeka charity aiming to get 5000 African kids on bikes and those who lost their lives not only on Utah Beach, where the stage finished, but all of those who fought for our freedom. Mark made UK politicians look like pygmies!

Mark's win today is also a reminder that sprinters are able to remain at the very top considerably longer than other cyclists. André Griepel is now 33, Cav 31, while Marcel Kittel is a relative youngster at 28. Mark has plenty more years ahead of him to equal or overtake Eddy's record. 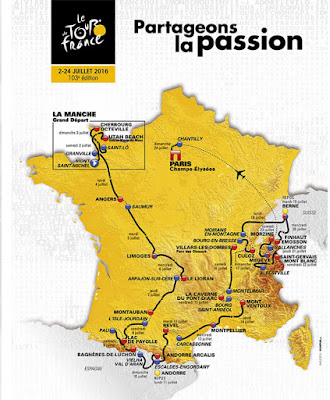