Yesterday's rain affected stage showed all too clearly why the Tour de France isn't over until the race reaches Paris and can spring surprises. Rain in the last quarter of the short stage made the descents treacherous. Romain Bardet showed how good a descender he is, riding away to become France's first stage winner in this edition. Bardet also moved into second place.

There were a number of crashes including Chris Froome on the last part of the final descent. Fortunately Froome had team mates around him, so was able to borrow Geraint Thomas' bike, ride up the last climb though it was a struggle and only concede a small amount of time on the stage to his rivals. Valverde and Mentjes gained 13 seconds, Quintana 10, Aru and Martin 8.

In contrast to Froome Bauke Mollema also crashed on the last descent but had no team to help him. He lost over four minutes on the stage to fall from 2nd place down to 10th. Astana spent much of the day on the front of the peloton but the tactic wasn't clear, though it may well have been disrupted by the late creashes.

Earlier Tom Dumoulin crashed at the beginning of a climb. It looked innocuous but he injured his wrist and had to abandon.

Due to Mollema's time loss, Froome has actually extended his lead, so now has a 4'11 cushion over Bardet, while Yates and Quintana have swopped places. Yates remains in the White Jersey, although he conceded a little time to Meintjes, who is now 2'16 behind. Rafa Majka ensured that the Polka Dot jersey is his providing he reaches Paris. 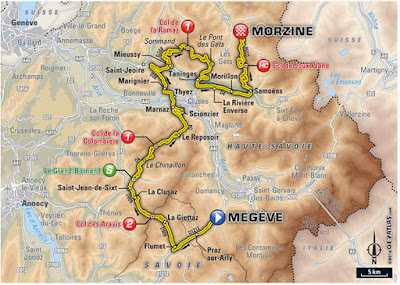 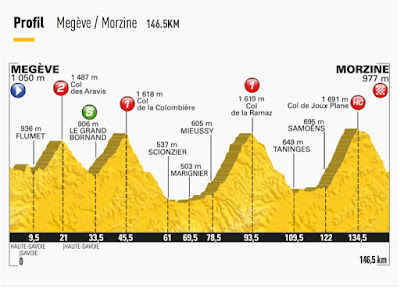 Today is the last chance for the GC contenders to gain or lose time on this short mountain stage. There are four ascents and, equally significantly, four descents and rain is forecast for much of the stage. The final descent from the Col de Joux Plane is tricky. This is where Stephen Roche gained vital seconds on Pedro Delgado in the 1987 Tour, making it easier for him to win the Tour on the final time trial.

There could well be further crashes today. It remains to be seen what affect Froome's crash yesterday will have had on his form. It will surely be a nervous day!
Posted by Jim's Loire at 10:07