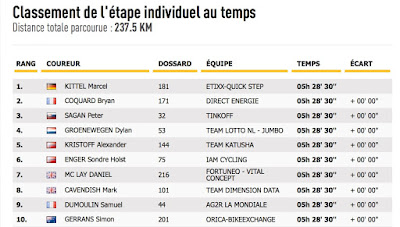 Marcel Kittel gained his sprint victory in Limoges yesterday by the narrowest of margins from Bryan Coquard, the young 24-year-old Frenchman from Saint Nazaire, who has been impressive in the Tours sprints this year. Although he doesn't belong to one of the big teams, Coquard was 7th (Stage 1), third on Stage 3 and so nearly beat Kittel yesterday. It would be good to see a French sprinter get a win.

Mark Cavendish came in 8th as he got boxed in – one of those days when you don't get it quite right. Virtually impossible to win stage after stage! Two this year is already highly impressive. 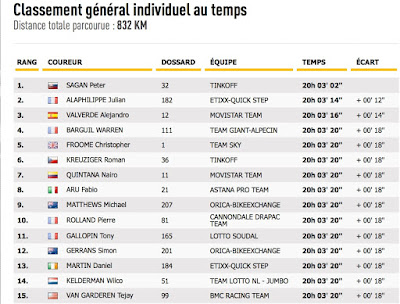 As I predicted Peter Sagan remains in Yellow. However, that ought to change today with Stage 5's visit to the mountains of Cantal. 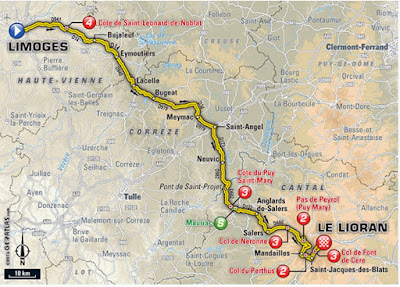 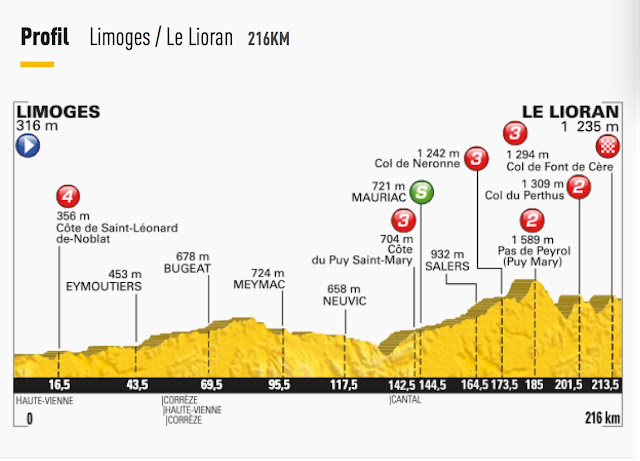 The stage has 6 category climbs with the highest Puy Mary classified as 2 along with the Col de Font de Cère, which follows. The first climb, which is a minor bump, is Côte de Saint-Léonard-de-Noblet, is the home of the legendary Raymond Poulidor. Known as the 'eternal second' as he never won the Tour instead finishing second to the Jacques Anquetil in the 1960s and then to Eddy Merckx in the 1970s.

With the serious climbs all concentrated in the last third of this medium mountainstage, we should see who of the GC contenders are strong. Will Alberto Contador have recovered from his crashes on Stages 1 and 2? I just hope that the racing is exciting and that the GC hopefuls don't just ride conservatively. If Peter Sagan is still in Yellow tonight it will be either because he has ridden exceptionally well or the GC contenders have played safe.
Posted by Jim's Loire at 10:24