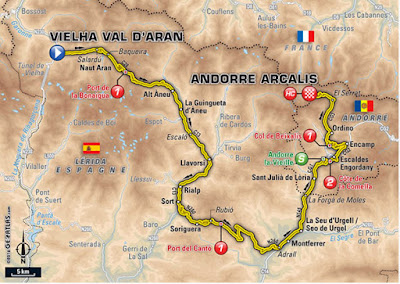 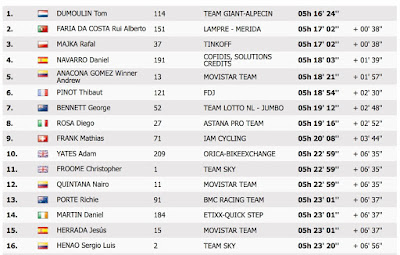 What was billed as the Queen Stage of the Tour turned out to be a stately procession through majestic scenery. Apart from the last few kilometres of the Arcalis climb when the GC contenders started to attack and the initial climb of the day, no-one was prepared to attack Sky and Chris Froome so they naturally rode tempo for much of the day allowing the break to build up a huge gap.

The stage began climbing from the very start up to the Port de la Bonaigua. There were attacks all the way up including Peter Sagan going for a long foray to pick up intermediate sprint points along with Alberto Contador and Alejandro Valverde racing clear of the peloton. For a moment the stage looked to be about to live up to its billing.

Contador soon faded and later retired from the race suffering both from his crash wounds and a fever. Valverde carried on caught the breakaway. They crested the Bonaigua and hurtled down the descent. On the flat, however, the Sky train started to catch up rapidly. Not long after Valverde eased up and waited for the peloton, who then let the large break of 20 riders or so disappear into the distance. Did Peter Sagan persuade Valverde to leave the break, so he could pick up sprint points? If Valverde had stayed in the break would certainly have been caught.

Both Thibaut Pinot and Rafa Majka were in the break. This time Pinot was the stronger and picked up enough points to take the climber's jersey off Majka's shoulders. Then just before the start of the final climb up to Arcalis Tom Dumoulin took off and remained in front to take his first Tour de France stage win. The excellent Dumoulin is the first new rider to be added to the list of stage winners this year. 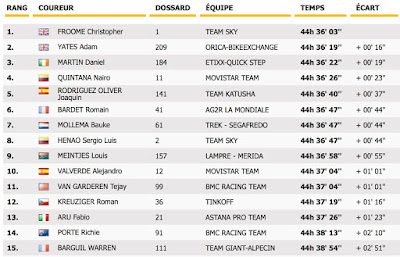 Overall there were a few changes but nothing like what one might have expected. Now there are only eight riders within a minute of Chris Froome. Tejay Van Garderen, Fabio Aru and Warren Bargueil lost a little time along with Pierre Rolland, who is now four minutes behind Froome.

White Jersey holder, Adam Yates, has extended his lead over Louis Meintjes a little. Mark Cavendish holds onto the Green Jersey but Sagan is only seven points behind now. Unfortunately Mark lost his lead out man – Mark Renshaw, who fell ill overnight and had to abandon.

Today is a rest day. Hopefully in the second week GC contenders will show more ambition and attack Chris Froome and Sky.