Yesterday's results
Although I picked Alejandro Valverde to win yesterday's tricky finish in Cherbourg, my option on Peter Sagan paid dividends as the world champion both won the stage and took over the Yellow Jersey from Mark Cavendish. Like Mark, this is the first time Sagan has worn the jersey. Given that the next two stages to come are flat, Sagan may well remain in Yellow at least until the end of Stage 5 at Le Lioran. The young French rider Julian Alaphilippe came close to winning the stage but Sagan proved to be too strong.

Good to see two of the great stars of today – Mark Cavendish and Peter Sagan – getting the Yellow Jersey for the first time. Sagan's 5th stage victory and remarkably his first since 5th July 2013 in Albi brings him up level on #TDF stage wins with Chris Froome, Sean Kelly, Hennie Kuiper, Tony Martin, Vincenzo Nibali, Herman van Springel and Jean Stablinski among others.

Among the favourites both Chris Froome and Nairo Quintana are on the same time – 14" seconds down on Peter Sagan. However, two of their rivals – Alberto Contador and Richie Porte – have lost time. Contador, who crashed on both Saturday and Sunday, is 1.02 down on Sagan. He was dropped on the 3rd category climb in the final kilometres. Richie Porte was unlucky to have a puncture around 5 kilometres before the finish and is now 1.59 down. The biggest question mark is over Contador – how will he cope with Stage 5 that visits the mountains of Cantal? Will he have recovered sufficiently in time? 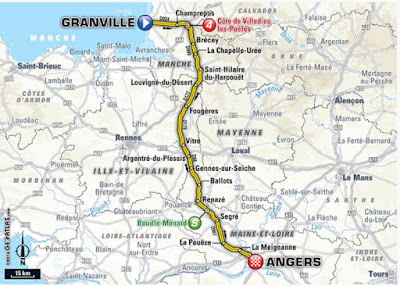 At 223.5 kilometres this is the second longest stage of this year's Tour – tomorrow is the longest – 237.5. Apart from a fourth category climb close to the start this stage is pretty flat especially in the latter stages – initially it is quite undulating. Jasper Stuyven, with 4 points, will keep his Polka Dot jersey as best climber.

The finish in Angers is on the Boulevard Foch by the town hall and a bunch sprint is very likely after the break of the day is caught. Unlike Saturday's finish, the final 600/700 metres of the stage is steadily uphill, although not steep but rises up some 80 feet.

The riders come over the Maine. The road is briefly flat as they go under the One K to go banner. Then the Boulevard Carnot starts to rise up. At the Hotel Mercure the riders turn right into the Boulevard Foch for some 250 metres before crossing the finish line with the road continuing to rise.

This uphill finish may well suit both André Griepel and Marcel Kittel plus Yellow Jersey wearer Peter Sagan. The trick may be to delay one's sprint until close to the line as if you start too early there is a good chance you will run out of gas. Mark Cavendish should also have a good chance if he can follow wheels until just before the line.