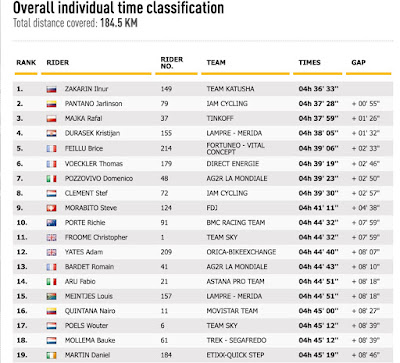 Ilnur Zaharin won yesterday's steep climb to Finaut-Emosson to take his first Tour de France stage, while Rafa Majka strengthened his position in the Polka Dot jersey. Majka has 173 points to Thomas de Gendt on 90 and Zaharin on 78. As usual Peter Sagan got into the break to snaffle maximum points from the intermediate sprint and then did a club run ride to the finish. Sagan has 425 points to Marcel Kittel's 228, so Green is his unless he crashes out. 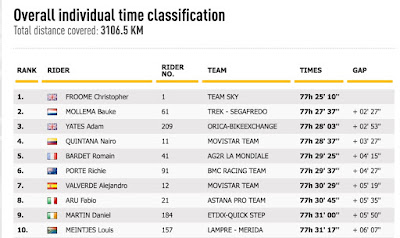 In the last kilometre Chris Froome gained time on all of his GC rivals apart from Richie Porte when Richie attacked. Of Chris' closest rivals the biggest losers were Nairo Quintana (28 seconds) and Bauke Mollema (40 seconds).  Alejandro Valverde and Dan Martin, who made an unsuccessful attack on the final climb, also lost significant time. Adam Yates put in another fine performance coming in just 8 seconds after Froome and Porte.

Once again the Sky train proved to be utterly dominant, although Astana did take to the front for a while with Vincenzo Nibali and Diego Rosa. Was the plan for Fabio Aru to attack? If it was nothing happened apart from first Nibali and then Rosa burning themselves out.

Once again Tejay Van Garderen showed that he doesn't last the three weeks of the Tour when he blew up on the penultimate climb and lost nearly 20 minutes to Froome. This leaves Porte as the undisputed BMC leader. 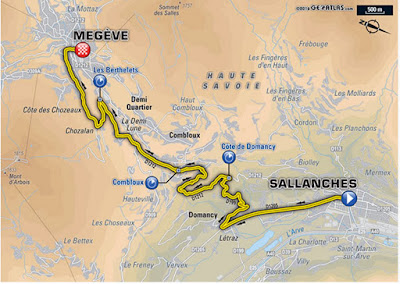 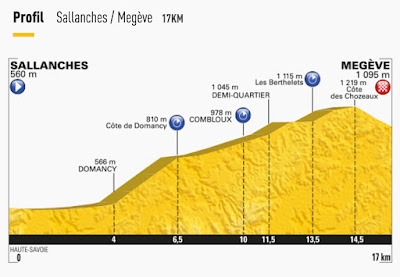 Today's mountain time trial is a tribute to Bernard Hinault's World Championship win here in 1980. I expect that Chris Froome will put further time into his GC rivals. It is now going to take a real disaster to stop Froome winning his third TDF. He deserves to win as to date he has shown himself to be the dominant rider.
Posted by Jim's Loire at 10:40