It looks like the grim reality of the current economic climate is impinging on Francisco 'Pancho' Campo's planned Future Economy Barcelona 2012 on 19th-20th October. Al Gore is the headlining act.

When ticket prices were announced in mid-June, the early bird offer ran up to the end of July. The nearly 1700 conference tickets available with split into three categories – Silver, Gold and VIP – and 'early bird' prices ranging from 550€ + vat (Silver) up to 950€ + vat (VIP). Prices would increase substantially from the first of August rising to 1200€ + vat (if I remember correctly) for the VIP. Spanish VAT is currently 18% but will rise by 3% on 1st September to 21%. 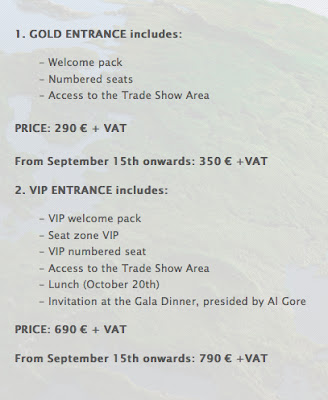 I assume that ticket sales were rather sluggish as the conference prices have fallen from their Olympian heights with a new special offer until 15th September. Gold has been renamed Silver and priced at 290€ + vat – down 260€ on the previous price. VIP tickets have also been cut by 260€.

Future Economy Barcelona 2012 is being organised in collaboration with the Generalitat de Catalunya. Although there is as yet no main sponsor, the Platinum sponsors are Ecoembes (a non-profit waste management organisation), Grupo Matarromera, Torres and Francisco Campo's wine academy. The three media partners are essential marbella magazine, Informativos.net and Revista Rusa en España (for Russian visitors in Spain).

Wasn't there a wine & climate change conference where Al Gore was supposed to participate too? But never did. (at least not in person)

Quite right. Gore appeared by video link. Will he turn up this time or perhaps send a keynote tweet?