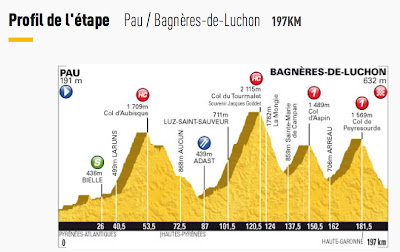 Today will be one of the toughest stages in the Tour. The route from Pau to Bagnères de Luchon with the climbs of Aubisque, Tourmalet, Aspin and Peyresourde is one of the great classics. Robert Millar famously won this stage in 1983 in his first Tour. Once the race reaches Laruns at the base of the Col d'Aubisque there is virtually no flat – the riders are either climbing or descending.

This is the only stage where I have ridden up all the climbs – admittedly many years ago and I didn't climb them all on the same day though it was all in the same year. I rode Peyresourde, Aspin and then Tourmalet (from the eastern side) all in one day and felt wiped out at the end of the day. I have also climbed Tourmalet from the west, which I found a more interesting side to climb. The climb through the ski resort of La Mongie on the other side was pretty dispiriting.

Will Vincenzo Nibali and Cadel Evans make any serious attacks? It would be good to see them attack on the Tourmalet rather than wait for the Peyresourde. But will they take the risk of losing their places in the top five? If they want to have any realistic hope of dislodging Bradley Wiggins or Chris Froome from the top two places, they will surely need to gain time rather than waiting for the last mountain stage tomorrow.

Frank Schleck has withdrawn from the Tour after having tested positive for the diuretic Xipamide.  Although a banned product it does not carry an immediate provisional suspension. However, the organisers clearly expected his team Radioshack to withdraw Schleck, which duly happened. Although there may be an innocent explanation for the presence of Xipamide, this is a disastrous end of the Tour for Schleck, who is becoming a figure of fun on Twitter. Xipamide can be used to lose weight or, more seriously, can be used as a masking agent.

Schleck has denied taking the drug and has exercised his right to have the second sample analysed. If this sample should prove to be positive Schleck has suggested he might have been poisoned. It is not clear why anyone would want to poison him.