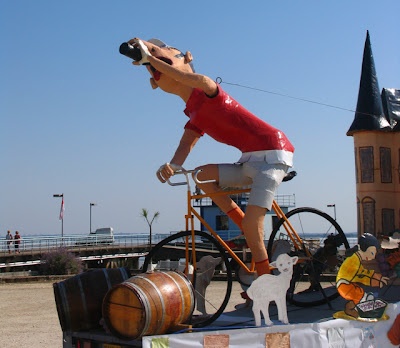 After just over three weeks spent following the Tour, I'm feeling a little bereft today now that it has finished. Time, then, for a few reflections on the 2012 edition.

Some have suggested that this year's Tour was boring. I don't agree and not just because Bradley Wiggins became the first British rider ever to win the Tour plus Chris Froome's second place, seven stage wins by UK riders – three of them by Mark Cavendish. Although fewer than in previous years, Mark's stage wins take him to 23 in five years putting him in 4th place in the overall stage winners' ranking. Only Eddy Merckx (34), Bernard Hinault (28) and André Leducq (25) have won more. Mark Cavendish is now the most successful sprinter in the Tour's history.

Yes Alberto Contador was not present because of suspension. Nor was Andy Schleck due to injury. Would the outcome have been any different had they been competing? I have my doubts. Schleck surely would not have put enough time into either Wiggins or Froome in the mountains to have survived the two long time trials. Less certain with regard to Contador but he wasn't hugely impressive in the 2011 and 2010 editions. Wiggins beat Contador in the 2010 final time trial from Bordeaux to Pauillac and Wiggins' time trialling has improved considerably since then as his two stage victories this year showed. Indeed at one point Contador was even losing time to Andy Schleck.

There were some thrilling victories by Peter Sagan – the first stage and the third into Boulogne – and by Thomas Voeckler at Bellegarde-sur-Valserine, Pierre Rolland at La Toussuire, Thibaut Pinot at Porrentruy and Chris Froome at La Planche des Belles Filles to mention a few. Then there were the two mesmerising wins by Mark Cavendish first at Tournai and then stunningly at Brive.

The French had a good Tour with Thomas Voeckler winning the Mountain Jersey competition and two stages. Long-term, even better news may well be the emergence of Thibault Pinot and Pierre Rolland's fine ride. All in all, five stage victories to the host nation. Then, of course, there are more young stars – Peter Sagan, especially, and Tejay Van Garderen.