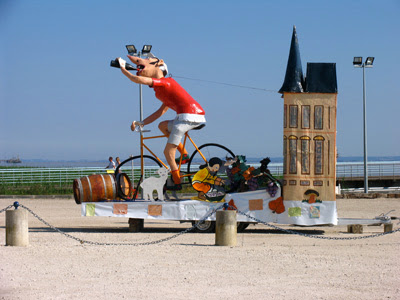 Frenchman Pierre Rolland made it a double victory for France following Thomas Voeckler's win yesterday. Like Voeckler, Rolland was in the long escape of the day. He managed to drop his companions in the final climb to La Toussuire to win by 55 seconds from the very select group of five riders – Bradley Wiggins, Chris Froome, Jurgen Van Den Broeck and France's youngest new Tour talent – Thibaut Pinot who came in second. The biggest loser of the day was Cadel Evans who cracked on the final climb, came in 11th and lost 1.27 to Wiggins.

Although Sky rode a brilliant race it was a much less comfortable day for them than yesterday as there were more attacks. Evans attempted an attack on the Glandon but it was soon clear that it wasn't his day as he could keep the pace of his team mate Tejay Van Garderen and looked to be in difficulty when the attack was taken by the Yellow jersey group. Vincenzo Nibali and Jurgen Van Den Broeck attacked on the Toussuire climb. Initially it looked as though they might successfully put time into Wiggins as Froome appeared to blow, leaving Wiggins to try to catch them. However, Foome soon recovered and led Wiggins back to Nibali and Van Den Broeck. Froome even managed unwittingly  to drop Wiggins when he put in an attack once they had caught Nibali and Van Den Broeck but slowed when he realised what had happened. The attacks, however, proved to be fatal to Evans and Chris Froome is now up to second place overall.

Although there is still a long way to go Bradley Wiggins has undoubtedly greatly strengthened his grip on the Tour today. He, Chris Froome and Team Sky proving to be equal to all the attacks.